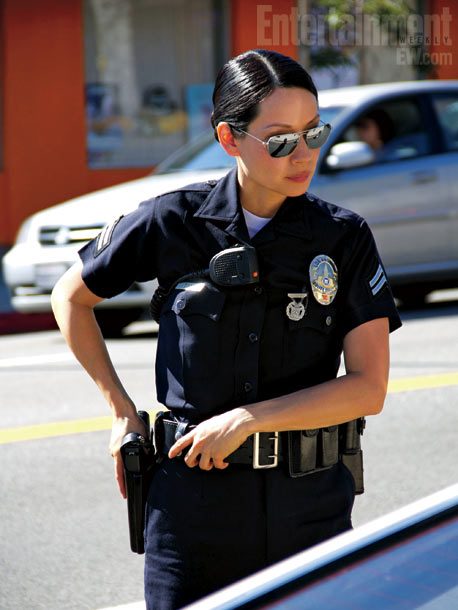 Lucy Liu is a fantastic addition to the "SouthLAnd" team this season - be sure to check out the show tonight at 10pm on TNT.
We've got a great (and conflicting) late prime time lineup tonight after the POTUS does his State of the Union speech. Last week we talked a lot about "Justified" because we'd been to the premiere and got a ton of interviews with the cast and lamented how "Justified" is also up against "SouthLAnd" and "White Collar."

I'm happy to report that I scored a great interview with the very friendly and web-savvy Michael Cudlitz who plays Officer John Cooper and I'll be posting that before next Tuesday. Cudlitz has been teamed with Lucy Liu this season and she's "become a part of the team" according to him, no superstar scene-stealing dialogue or posturing from her for this series - just more of the realistic, yet character-driven storytelling we're used to (and demand!) from "SouthLAnd." Thankfully we can catch all the late primetime shows because these cable networks are smart enough to repeat them up to 3 times between Tuesday night and Wednesday morning so set your DVRs. For more "SoutLAnd" related content, be sure to check out Cudlitz's co-star Ben McKenzie who will be on "Jimmy Kimmel Live" on ABC at 12:05am. I interviewed Ben a couple years ago for LAist and he's another modest yet supertalented member of the "SouthLAnd" team that deserves your eyeballs every Tuesday.
—-
Last week I posted my interview with SF Sketchfest co-founders Janet Varney and Cole Stratton. Here is the Channel Zero podcast with more of the interview which is a must-listen if you are into comedy festivals, sketch and improv:

Thank you for listening, please subscribe on iTunes and please rate!

Check out the SF Sketchfest schedule, you are guaranteed to find something that you will want to go up to see and/or tell your Bay Area friends about. Highlights this week through Sunday are: Eddie Izzard, SF Sketchfest Comedy NightLife at the California Academy of Sciences, Set List: Comedy Without a Net, Jon Benjamin Has a Van Live, The Spanglers, The Meltdown, Harmontown (Dan Harmon - creator of "Community").
—-
Attention LA-Area Ninjas: G4's "American Ninja Warriors" is coming back and they'll be holding tryouts locally, apply here.
—-
While the Oscar nominations were announced this morning, TV has the potential to win as well with 2 films that are part of PBS's "POV" (Point of View) series" Marshall Curry's If a Tree Falls: A Story of the Earth Liberation Front, which premiered on POV in 2011, is nominated for Best Documentary (Feature), and Robin Fryday and Gail Dolgin's The Barber of Birmingham: Foot Soldier of the Civil Rights Movement, premiering on "POV" in 2012, is nominated for Best Documentary (Short Subject). Congrats to PBS.
—-
The TV Junkie Must-Watch Plan: State of the Union, "Hidden City," "SouthLAnd," "Chelsea Lately," "The Colbert Report," "Jimmy Kimmel Live," "Justified" (late repeat)

6:00pm State of the Union - 2012 President Barack Obama addresses Congress and the nation.

10:00pm SouthLAnd TNT - Underwater Tang and Cooper are attacked on the street; Lydia and Ruben investigate a convenience store murder; Ben and Sammy ride with another officer; Joel Rucker takes over as the new captain.

10:00pm Justified FX - Cut Ties The murder of a fellow Marshal throws Raylan together with a woman from his past; Boyd engineers a showdown with Dickie Bennett.

10:00pm Ragin' Cajuns Discovery - Shrimping, Storming, and Stabbing The fleet has one of the worst opening days in history; a storm threatens to end the season just as it begins.