TV Junkie: New 'Mortified Sessions'; Hoping That We Get More 'After Lately' 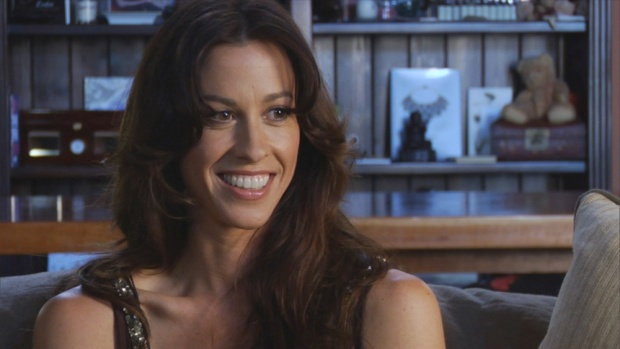 Alanis Morissette is featured in tonight's "The Mortified Sessions" on Sundance at 8pm.

I keep meaning to tell you about this great show on Sundance called "The Mortified Sessions." I've been watching it as it reruns during other days of the week but new episodes premiere on Monday nights at 8pm. The show has various performers and high-profile individuals relate some kind of horribly embarrassing moment or moments they experienced as a kid. Tonight's subjects are Alanis Morissette and TOM Shoes Founder Blake Mycoskie but previous episodes have included Eric Stonestreet of "Modern Family," and Bryan Cranston of "Breaking Bad" to name a couple.
—-
Hopefully after an exhausting and brain-numbing afternoon yesterday you tuned into E! to catch "After Lately" at 11pm for another great episode. The season finale is next Sunday, January 29th, and that's a shame because I feel like we're just getting rolling with the show. The show had a hiatus over the holidays and another last week because of Golden Globes coverage which has broken up the show quite a bit over the last 2 months. I'd like to appeal to E! to commission multiple seasons of the show with at least 12 episodes per season. It's obvious that people love the show as my twitter feed comes alive with compliments about it every Sunday night. Last night was no exception as Reese Witherspoon returned to the offices of "Chelsea Lately" to interfere with production and cause tensions with the staff and senior writer Brad Wollack got super-POd about parking, just like what happens in any office any week of the year. Somehow Chelsea Handler has persuaded these celebrity guests to let down their guard and appear human on this show and as a result you get to see how flexible and talented both the guests and the in-house crew at "Chelsea Lately" are and it seems that each of the staff get to rotate in and have several moments to shine each season - is this some kind of egalitarian dictatorship?

Word has it that the production of "Chelsea Lately" is moving to the sound stage where Conan O'Brien's short-lived tenure on "The Tonight Show" was produced. Hopefully this larger space will provide room for the various sets required for "After Lately" as well as the flagship show and we can get meatier seasons produced. Note for "Chelsea Lately" fans: Ross Matthews is hosting all this week as he told me at the Golden Globes.
—-
Podcasts of Note: I had the great fortune of being at the recording of a couple of my favorite podcasts in the last week or so. First off is this Long Shot Podcast live performance edition recorded at the Hollywood Improv Lab on January 14th, where all the regular members (Amber Kenny, Sean Conroy, Jamie Flam, and Eddie Pepitone) did standup sets along with the brilliant Morgan Murphy. On January 16th I was at the recording of comedian Greg Fitzsimmons' Sirius XM radio show as well as this edition of FitzDog Radio with Merrill Markoe, author and longtime former producer of "Late Night With David Letterman." Both are excellent episodes and range from the hilarious to the informative. Check them out.
—-
The TV Junkie: "Adventure Time," "The Mortified Sessions," "The Layover," "Bizarre Foods With Andrew Zimmern," "Conan," "Jimmy Kimmel Live"

7:30pm Adventure Time Cartoon Network - A new half-hour of this awesome series! If you don't like it, lump off!

10:00pm Castle ABC - An Embarrassment of Bitches The investigation into the death of a famous dog trainer leads to a reality-TV star.

10:00pm American Masters PBS SoCal/KOCE - Phil Ochs: There But for Fortune The life of activist and singer-songwriter Phil Ochs.