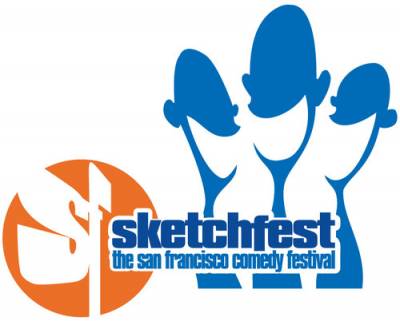 SF Sketchfest started last night and runs for 2 weeks!
11 years ago 3 performers who loved sketch comedy put on what was to be the first SF Sketchfest - a few sketch comedy groups at a single venue. Co-founders Janet Varney, Cole Stratton, and David Owen have stuck with SF Sketchfest over the years and have gradually expanded it to this year's edition: a 2 week-long celebration of all things comedy with well over 100 separate shows and hundreds of performers participating.

2 of the co-founders, Janet and Cole, moved to Los Angeles a 7 and 9 years ago, respectively, to pursue careers as actors and writers, but continue to work with the still-San-Francisco-based David to book performers, plan and execute each year's edition of SF Sketchfest. You've seen Janet in countless roles on TV, including appearing as a recurring character on HBO's "Entourage" and for 15 years on TBS' "Dinner and a Movie" show. Cole has appeared in a variety of national commercials in addition to roles on shows from "Nash Bridges" to "America's Most Wanted" and has collaborated with Varney on RiffTrax.com, downloadable comedic commentary to films like Dirty Dancing, Ghost, Footloose, Poltergeist, and more. These collaborations and their live performances with other artists at UCB Theatre and countless others, helped lubricate the recruitment of performers from stage, TV, and film for SF Sketchfest.

Varney and Stratton kindly gave us an hour of their time as they prepared to take off to San Francisco to launch the 2012 edition of SF Sketchfest which began last night. Here are the highlights of our conversation:

You guys have managed to create an incredible schedule for this year's events and yet you guys are based in Los Angeles.

Janet: Our third partner David is thankfully in San Francisco which leaves one of us still up there.

Cole: I think that's confusing for some people as our business address is down here, so we have all these sketch groups and comedians sending their audition tapes to LA, I'm sure that some of them have wondered "Why am I sending this to LA when it's for SF Sketchfest?" [Laughs]

Has moving down here helped you recruit, getting others involved in Sketchfest?

Cole: I think so.

Cole: I do really love heading up there to do this and doing all the things I miss, but I find I miss LA by the end of it. I do love them both equally. I think we have built a lot of relationships down here, working at places like UCB, and that has made it easier to talk to people about what we're doing at Sketchfest.

What are things that have stood out to you in terms of how comedy works in San Francisco versus LA?

Janet: When we were doing sketch in San Francisco there were great places to see standup but it was kind of difficult to see sketch because they don't have something like a UCB Theatre or a Second City.

Cole: There were a couple tiny venues but they weren't ideal.

Janet: So we began booking sketch sets at standup venues. We used these tiny standup stages where we were trying to stage these larger theatrical pieces but that wasn't necessarily a fit for us. That's actually a reason why we started the festival, to help create a unified community for sketch. There was so much great sketch going on but audiences didn't know that there might be another 3 sketch groups that they might like performing at other little venues around the city. On the positive side, the audiences in San Francisco are some of the best we've ever had. They're not cynical, they're not industry-based the way that audiences in New York and LA can be. They're so educated and savvy and connected with the arts. When audiences come to our shows at Sketchfest, they are there to laugh and listen and not to judge.

Cole: When I first came to LA and started doing shows I discovered that if you didn't have a built-in fanbase it was difficult to bring people out for shows. There's that feeling of "Are people enjoying this? Are they just here to judge me?" I've joked that it would be fun to do a solo show and give out lab coats and clipboards to every member of the audience, because if it feels clinical let's really make it clinical. My hope is that San Francisco gets something like the UCB Theatre, where sketch is in regular rotation along with improv and standup, a format that's pretty big down here. Sketch is an art form that's pretty timeless in a lot of ways because even though the general population doesn't really know what sketch is they have been enjoying it. Even if you say "You know, like 'Saturday Night Live,' 'Monty Python,' or 'Kids In The Hall?'" they're not really sure what genre you're referring to but they like it.

It seems that these days, the different comedy disciplines, standup, sketch, and improv have become mutually supportive, has this alway been your experience?

Cole: The first year of Sketchfest was us and five other local sketch groups. We rented out a small theatre near Union Square for a month and called it a sketch festival because we needed an angle, and had each group co-headline each night with a standup opener. We weren't sure what to expect - we made the tickets $12 and one of the guys from another group thought we were crazy for charging that but we had expenses to cover, like the rental of the theater, etc. Somehow they all sold out, they were completely packed in. I think everyone was surprised by how this turned out and how enthusiastic everyone was for the art form because up until that point we had all been struggling to find stages and places to perform consistently. I think then we realized "This is a thing!" and decided to continue and the next year we rented a bigger theater and got people like the UCB to show up, who were huge heroes to us, and we were so pleased that they decided to take a chance and come up to San Francisco to do this with us. Then we've seen how these other festivals have popped up, like in Chicago, Philly, New York, Portland, and so on.

Janet: Some of those festivals do what we do, where they did have their roots in sketch but have crossed over and include other forms of comedy. For us, getting that infusion of energy back from the public, the performers, and the press, made us feel reckless in a good way: "If they like this, let's do more, we like standup too, and movies, and comedy music." So we started booking groups and headliners that don't do sketch so that we could start building a more Montréal [Just for Laughs] type festival and it started paying off right away. We knew that the sky was the limit in terms of what type of comedy we could bring to the table even though we're called SF Sketchfest.

Cole: Though there are still some people that gripe "For a festival that calls itself Sketchfest it doesn't really have sketch" but we have so much sketch.

Janet: We have more than 50 groups! It's still an amazing place to see up-and-coming sketch but there's a limitation on the bigger acts because sketch doesn't exist in the same way that standup and comedic films do. On TV you might have a couple successful sketch groups on TV at one time and then sometimes there's nothing.

Cole: We've had The Whitest Kids You Know, Stella, we'll bring The Kids in the Hall back when we can.

Janet: A lot of people cross-pollenate, they do standup, they're comfortable doing sketch or music. It's fun hearing conversations between performers and how much admiration they have for each other. Like a standup saying to an improv performer "I don't know how you get up there and just make shit up! Improv's crazy, I could never do that!" and a sketch guy will say to a standup comedian "Dude, you get up by yourself, as yourself, I could never do that. I need written material with people behind me, I need to play a character, I so much admire what you do." It's so fun to hear these conversations.

What acts are you most looking forward to this year?

Cole: While you can see a lot of the performers around here for just $5 because they live here, part of the fun of putting together SF Sketchfest is bringing in performers that we don't normally get to see or that rarely make it out to LA or who are unveiling a new show or new set of material for the first time.

Janet: We also try to program events that are unusual enough to bring people to the show from all over, including LA.

Cole: I can pretty much guarantee that you're not going to see a Wet, Hot, American Summer live reading happening anywhere else.

Cole: The fact that Wet, Hot is even happening is a little of surreal. So many of the original cast members are revisiting their roles and there are going to be some fun and famous understudies for the other roles - so it's just going to be a fun and surprising show for people to see!

Janet: But if you don't have tickets you won't be able to see it so come up and see something else! [Laughs]

Cole: This is the first year we've had The Groundlings who we're big fans of.

Janet: We've have tons of Groundlings members in the past but nothing like this Groundlings-produced show.

Cole: Then there's a show called "The Black Version" which is one of the coolest improv shows there is. It's an all-African-American cast and they ask the audience for a suggestion of a famous film and then they improvise a black version of the film.

Janet: About mid-way through the festival we're doing a show that's been done here and several times in London called "The Set List" which is another crossover show, it's basically improvised standup. The comic isn't given their topics until pretty much when they walk on the stage. Greg Proops is on it, and Jon Dore, and Matt Braunger and a bunch more.

Cole: I'm looking forward to doing my live podcast there, Pop My Culture, where I've got Drew Carey as a guest.

Janet: Our closing day is at the Castro Theatre where we have a bunch of different things that day that we're super excited about. We've got a screening of The Dark Crystal, the movie turns 30 this year which makes me feel really old, and then we're doing a Best In Show screening right after that with Fred Willard and Michael Hitcock doing the Q&A. Then we've got a M*A*S*H tribute to Robert Altman that his wife will be at, and that Sally Kellerman and Robert Gould will be at. Our last-minute addition is Peaches Christ who is an amazing drag performer, which is an understatement, who is doing a big stage show with The Rocky Horror Picture show followed by an interview with Barry Bostwick who is a special guest, so that's going to be amazing. You could just live at the Castro on that day!
—-

For more information on SF Sketchfest check out their website but really take a look at their schedule of amazing shows and performers.

Links:
Cole Stratton
PopMyCulture Podcast
Janet Varney (who will have her own podcast coming up soon over at Nerdist!)