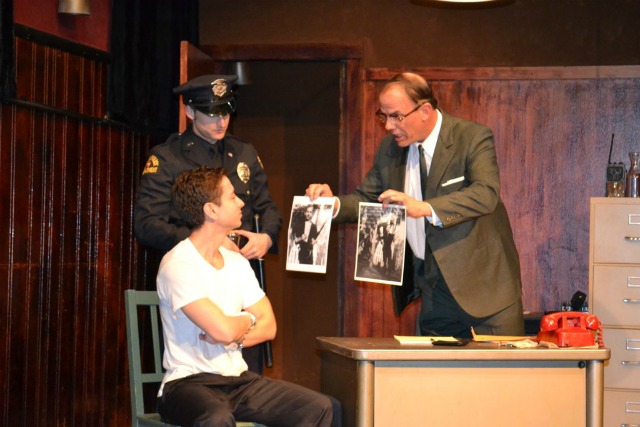 Dennis Richard's intense interrogation drama Oswald is currently playing at Write Act Repertory Theatre in Hollywood. The play is set in a Dallas police station on November 22, 1963, just hours after the murders of John F. Kennedy and police officer JD Tippit. Richard's based his work on what little is known about the interrogation of Lee Harvey Oswald, constructing a plausible and believable account of events. Brimming with Texas-style machismo, Oswald features excellent performances, fluid direction and an absorbing script brimming with machismo.

Andrew Perez and P. David Miller lead the cast of Oswald. Playing Lee Harvey Oswald, Perez's performance is wonderfully engaging, direct, and full of vitality. He keeps the audience on its toes, never fully indicating whether Oswald is a manic, defiant assassin or the only sane man in the room. The role of Oswald appears to be incredibly challenging, but Perez never once lets the audience down. He puts his entire being into the role, only hinting at the toll during his final bow and nod after the play is over. Miller plays chief interrogator and head of the Dallas Police, Captain Will Fritz. Miller's portrayal of Fritz accurately captures the temperament and subtlety of the real police chief. While the role calls for less bravado than that of Oswald, Miller crafts a complex character portrait whose duality brings richness to the fabric of the plot. 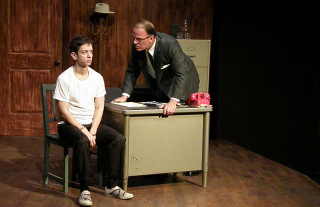 Andrew Perez and P. David Miller in 'Oswald' (photo by Dennis Richard).
The entire supporting cast contributes to mold the hectic, yet stale atmosphere that must have indeed existed at that particular place and time in history. The entire spectrum of potential attitudes that might have existed are demonstrated through capable performers including Dan Burkarth as Detective Jim Leavelle, AJ Jones as Officer Sims, and David Lee Garver as District Attorney Bill Alexander. Each performer lends credibility and authenticity to their roles by avoiding easy stereotypes.

Richmond Shepard's direction of Oswald is truly transportive. Shepard makes it easy for the audience to lose themselves in the drama and bureaucratic atmosphere of the work. The play looks like real life, if only for the time that it takes to perform a couple of acts. Attention to period details transport the audience back in time. Fueled, frightening outbursts from the performers and concentrated use of the stage are exciting and thrilling.

Richard's script is well-researched, full-fleshed, and smartly-orchestrated with dense, sympathy-drawing characters. While many audience members may be drawn to Oswald because it revisits a chapter of American history that has never been fully closed, it is very easy to draw parallels to contemporary political paradigms and the status of indefinitely held enemy combatants.