A Bounty of Buñuel At The American Cinematheque 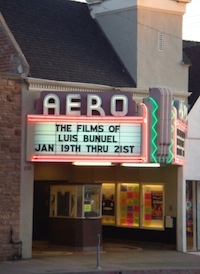 Photo by Jonathan Peters
This Thursday marks the beginning of an exciting Luis Buñuel tribute weekend at the American Cinematheque. Six of the director's films, including his groundbreaking collaboration with Salvador Dali, the surrealist short "Un Chien Andalou," will be featured at both the Egyptian and Aero theaters. Saturday night promises a rare print of society satire The Exterminating Angel and The Criminal Life of Archibaldo de la Cruz at the Aero in Santa Monica.

While Buñuel may have been born in Spain and made his first films with Dali in France in the 1920s, he spent his later years in Mexico, coming as an exile from the Spanish Civil War. The retrospective traces his development from surrealist rebel to master director. The Discreet Charm of the Bourgeoisie, a charming satire of a dinner party gone wrong, screens at the Egyptian in Hollywood on Sunday night.

Oscar Arce, director of the Luis Buñuel Film Institute, which co-presents this retrospective, is especially excited about Thursday night's opening triple-feature of films. Arce says, "Los Olvidados never gets screened, anywhere." While Bunuel's influence is felt far and wide in Europe and Latin America, he has far less recognition in Hollywood, where he struggled in the thirties and forties to join the studio system. In Arce's words, this retrospective is "a golden opportunity for us."

Dates and times can be found on the American Cinematheque's website.