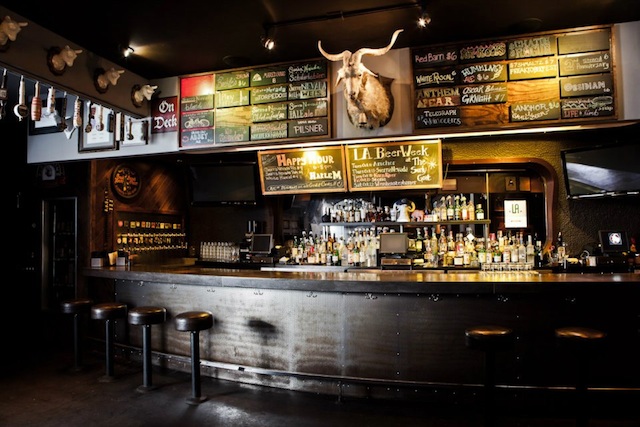 Here's some news local beer lovers can drink to: Draft Magazine recently published their 2012 list of the 100 Best Beer Bars in America, and 5 of them are right here in L.A.

What all of the 5 L.A. picks have in common are that they are places that have knowledgeable staff and are spots that can easily be defined as being bars for people who really love beer.

In alphabetical order, Draft Mag's local picks are:
- Blue Palms Brewhouse, Hollywood
Singled out for "doing beer right" as in "the brews are served in correct glassware at proper temperatures." Bonus: great food. Recently Blue Palms suffered an almost-setback when the Henry Fonda's lease was lost; so far though they are still there and still pouring.

- The Daily Pint, Santa Monica
It's a "jackpot" for beer lovers here. Four cask engines, plus special brews, and games for " jeans-and-T-shirt " kind of guys.

- Father's Office, Santa Monica
Despite the long waits and the crowds, the "36 taps and a super-knowledgeable staff make it worth your while" here. Oh, and that burger...Draft says it "is still one of the best uses of beef in town."

How did Draft Mag do with their picks? Which L.A. beer bars would you like to see added?