TV Junkie: FX at the TCAs - The Russell Brand Experience 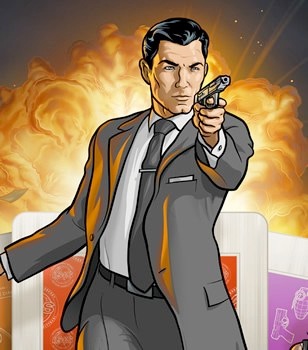 "Archer" returns to FX tonight!
A Quick Summary of the Television Critics Association Winter Sessions: I was there for 8 of the 11 or so days of TV network parades. I was there for the embarrassment that was Michael Patrick King, showrunner of CBS' "2 Broke Girls," and his arrogant and out of touch pronouncements on how he would continue to treat race on the show. I was there for the guerilla cocktail party set up by the "Cougar Town" showrunners that just may have pushed the show into the open slot left by the cancelled "Work It" ("Cougar Town" returns to ABC on Valentine's Day). I got a double-dose of J Lo, first with the "American Idol" session, which I thought felt awkward and fake until I experienced her with Marc Anthony at a disaster of a presentation run by Univision - no questions were allowed so the event felt like a Hallmark card showcasing that those 2 are just "great friends" after their failed marriage.

It seems like I'm nitpicking these events but the fact is that they cost a ton of money to present and are supposedly run by highly-paid professionals in the field of PR, marketing, and events management and their counterparts at the networks who assemble and prep the network presidents, showrunners, writers, and talent, before they go onstage at the TCAs. It seems the best they hope for is a boring session, or at least, one without controversy. These sessions are an expected and established format: the network president or head of marketing provides some statistics on the show, a promo clip is shown to (blasted-at-full-volume) the 100+ critics in the hall, and then after an opening remark (perhaps) the session immediately turns into Q&A with the audience of critics.

Too many times the stage gets overloaded with producers and talent that will never even get a question posed to them, with literally 10+ people on the stage. What a waste. I think the "Shameless" panel, which was one of the better ones, had most of the cast, including Joan Cusack, who is fantastic but didn't get asked a single question because time was taken up by series stars William H. Macy, Emmy Rossum, and the showrunner. It seems like every Winter Session ends with the best: a half day of FX programs. With standout moments from "Justified" (although they too had too many people on stage), "Archer" (who seemed to have the perfect amount - everyone had something to say), and particularly "Louie," which, like last year, had simply Louis C.K. ably fending for himself against the room.

C.K. did a great job explaining that he has built a skillset ideal for his multihatted role in creating the series but that he'd like to drop editing from his responsibilities. C.K. also expressed some dismay not having enough written at this point in time but I seem to recall him saying the same thing last year. From C.K. we moved to the final FX presentation of the day, that for the tentatively titled "Strangely Uplifting," something positioned as a Russell Brand vehicle. I was hugely resistant to the very idea of this show as I felt we had enough over-exposure to Brand to last a lifetime (anybody remember Arthur?). There was no way I was going to be interested in some reality show that followed Brand around, it seemed like an insult directed at fans of the network that has already brought us so much great comedy ("Archer," "It's Always Sunny In Philadelphia," "Wilfred," "The League," "Louie"), but after a short statement by showrunner Troy Miller, it was all Russell Brand and the guy simply blew away the room full of jaded, out-of-touch, and mostly-antisocial "journalists."

We just had to stop typing on our stupid computers as Brand issued forth statements like the following, in response to a singl question "If you had to do a show [like Rosie O'Donnell's] what would be the topic you'd discuss?"

Russell Brand: Brilliant. I'm glad you asked that because I prepared for it. Dah dint dint dint dint... If we were doing it today, right, here are some things I've got opinions on that I've got written down here, news things. Right, yeah, I think we probably have people turn up. It's a very free flowing show. You know like because this is a very modern time. What I'd like is for this to be like, you know how Louis is to the convention of sitcom, I would like this to be sort of news and topical comedy, very deconstructive, brilliantly put together by Troy, shot on sort of close circuit cameras, stripped of all nonsense, stripped of all subterfuge, no "Hello, coming up after the break," none of that rhubarb, just truth and beauty and humor. If we were doing stuff today, here's some things I'm a bit concerned about, right? I like that Mitt Romney got told off, like people are angry, Newt Gringrich which is a ludicrously amphibious bizarre name for anyone to have.

He attacked Mitt Romney because he talked some French, like that's really amazing. Like he said that makes him elitist and like a bit of a whoopsie. Like he was sort of speaking French in a boudoir, in a homoerotic fashion. It's like it's all right that there are other languages, and people say different stuff. This is so extraordinary to me that someone would be criticized for that. I love it. Just for using a different lexicon. It's more important what someone says rather than the language they say it in, isn't it? Like it's so easy to whoop up hoopla over nothing, over nothing. That's what I mean. It's vacuous. It's nonsense. It's as sort of a pink gas being fired into our eyes out it's like I consider contemporary culture to be like a sort of a pink pony trotting through the world shitting glitter into our minds.

Glitter affects the synaptic firing of our brains because there's glitter shit all in the middle of our neurons. We can't think. They're filling our minds with shit glitter. A glitterating thought. So we talk about that nonsense, that rhubarb. And also them say like of course it's bad for like I've spent some time with the marines at Camp Pendleton. I trained with them for a couple of days. They were fucking lovely. And the sense of fraternity among them was beautiful, and I liked it. I didn't really do very well as a marine. The obstacle course is fucking difficult. You have to climb a rope. It's really, really, really hard. So I've got a lot of respect for the marines.

Like but the end of this, I think where they peed on some dead bodies, huh? That was was that the marines? Because remember I'm a naive person, so I may make mistakes. So please don't judge me. But you will judge me. That's just the way that your binary minds function.

I'm not criticizing you. I have a binary mind as well. It's just the way we are. So it's bad to wee on a dead body, right? But like it's worse to kill someone. So it's like why are we more shocked by people pissing on a dead body than killing a live body? Like say me, I'm alive at the moment, right? If someone said, "I'm either going to piss on you or kill you," like if there's some people, the pissing on me, I would be sort of into.

I'd rather they did that than didn't do it. But killing, you sort of think, "Well, I don't know how my narrative will continue after dead." That's really troubling. After the termination of your life force, after this biological spaceship has deceased, might as well piss on me, do as you like. Go nuts. Have a ball. It's the killing that's the problem. That bit we won't broadcast in case he goes into trouble. We do that and then Troy will go "Nah, it's too much. It seems like you're endorsing it."

Also very near the top, you implied strongly that you're into golden showers. That makes you an unsympathetic protagonist for a mainstream show.

A lot of people consider the old golden shower elitist. Imagine what Newt Gingrich would make of it. "He's speaking in French. He's getting pissed on. He shouldn't be president," or should he?

[OK, so he's convinced me, I'm watching his show.]
—-
Hopefully some of you went to Greg Fitzsimmons show at the Laugh Factory to witness history. If you couldn't make it, you could see Greg do his live podcast 6:00pm tonight at the UCB Theatre with TV's own Nick Swardson as guest.
—-
The TV Junkie Must-Watch Plan: "30 Rock," "Parks and Recreation," "The Office," "Up All Night," "Archer," "Chelsea Lately," "Late Night With David Letterman," "The Late Late Show With Craig Ferguson"

8:00pm 30 Rock NBC - Idiots Are People Two! A video of Tracy on an offensive rant leaks online; Jack refuses to approve of Liz's boyfriend; Kenneth and Jenna turn to Kelsey Grammer for help.

9:00pm The Office NBC - Pool Party When Robert decides to sell his mansion, Kevin suggests he throw a p
ool party for the office; Erin flirts with Dwight to get Andy's attention; Robert gives a tour of his home.

9:30pm Up All Night NBC - Rivals Ava and Reagan suspect a rival of stealing show ideas; Reagan is jealous of Chris's new friend.

10:00pm Archer FX - The Man From Jupiter Archer is shocked to learn that his mother is dating Burt Reynolds.

10:30pm Unsupervised FX - Series Premiere. Gary and Joel try to change their image to hook up with girls.