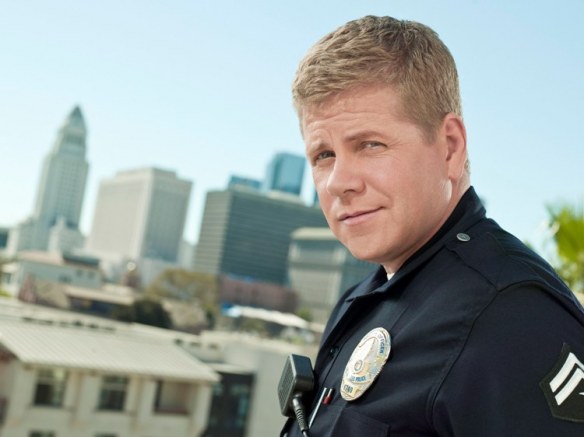 Yesterday I only had time to hammer out a quick sentence about the "SouthLAnd" premiere and while the fact that the premiere was going to be great, I had no insight on the season as I hadn't interviewed anyone from the show (or received more than just the premiere episode). I had some plans to interview series star Michael Cudlitz but they fell through both times and then the idea of an interview disappeared as the holiday season beset us. I didn't mean to imply that Cudlitz was the one responsible for the interview not happening, I never dealt with him directly in trying to set it up. Still, the ball was left in TNT's court in order to get one going.

Cudlitz has been very generous in providing LAist time for interviews, including our most recent one, just over a year ago. The man is super-internet-savvy and many people credit his ongoing Twitter campaign as a major reason why "SouthLAnd" is on still on the air - he is relentless in his support of the show and spends a huge amount of time engaging in countless online interactions with fans of the show. So, of course, he saw my offhand remark and contacted me immediately about setting up an interview, which will happen very soon. Many thanks to Michael for being so on top of his online reputation, I'm looking forward to finding out some details on what looks like a fantastic season of "SouthLAnd" on TNT. If you missed the premiere last night, you have the chance to see it again tonight at 11pm.
—-
In another limited opportunity for you TV Junkie readers here at LAist, I urge you to go check out Greg Fitzsimmons showcase his new hour of comedy at the Laugh Factory in Hollywood tonight at 8pm. Fitzsimmons is currently the host of "Pumped" on the Speed Channel and is a multi-Emmy-winning comedy writer very much worthy of your attention. What he's doing tonight is showing off a full hour of his comedy for the purposes of it being produced as a TV special. If you're a fan of comedy and of TV this is an opportunity to see how stand-up material is presented in preparation for a TV recording. See what Greg does on stage now and compare it to what will run on TV later. I've seen Greg do stand-up many times, he is absolutely hilarious, you will have a great time, I highly recommend going to see what will be a very special performance. If you're a "Chelsea Lately" fan you saw Greg on the roundtable last night and he was, yet again, stellar.
—-
The TV Junkie Must-Watch Plan: "Are You There, Chelsea?," "Modern Family," "Happy Endings," "Royal Pains," "Chelsea Lately," "Conan" (2nd half), "Late Night With Jimmy Fallon"

8:30pm Are You There, Chelsea? NBC - Sloane's Ex When Sloane's high school boyfriend shows up at the bar, Chelsea can't resist going out with him; Rick tracks down his ex and finds out she is engaged.

9:30pm Happy Endings ABC - Makin' Changes! Penny tries to change the slacker (Ryan Hansen) she is dating to suit her needs; Brad starts acting the way he did in college; Alex and Max try to convince Dave to give up V-neck shirts.