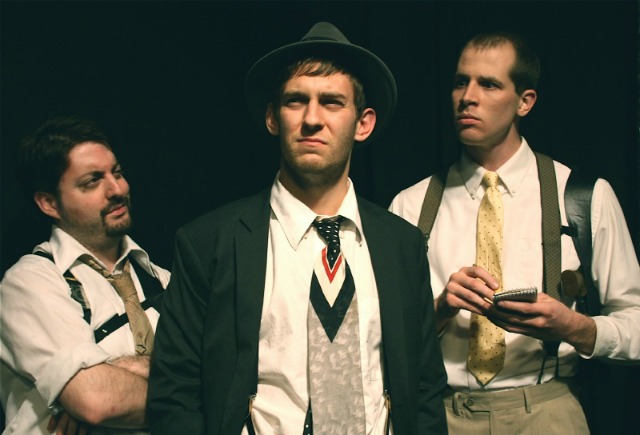 Vanessa Cate's dapper murder mystery, Absolute Black, is currently playing at Zombie Joe's Underground Theatre in North Hollywood. This homage to film noir whodunits follows a nameless, witty private eye and two bumbling police officers as they try to interrogate suspects after the untimely death of an up-and-coming Hollywood starlet. While the acting and overall flow of Absolute Black is at times so bad it is almost funny, strangely enough, the production emerges as a stylish and entertaining period piece peppered with a few spikes of theatrical brilliance.

Performance quality varies greatly between the players in Absolute Black. Carolyn Hayver plays central character Minnie, a rising Hollywood actress at the crux of her career. Hayver does not consistently deliver her dialog convincingly but does indeed shine during key scenes and Minnie's moments of despair. She imparts her final scene perfectly with a dramatic and gory exit that makes the whole play truly worth seeing. Hayver and Irina Costa (playing aging movie star Verna Meyers) have excellent stage chemistry as rivals vying for the attention of A-lister Harvey Milestone (Jeff Cowan). They bring out the best in each other, fostering a complex atmosphere of understanding amid disgust and tension. 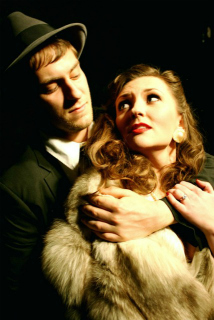 Finally, Willy Romano-Pugh plays the nameless, but crucial Private Eye character. At times Romano-Pugh seems uncomfortable with the hard-nosed aspects of his role but aptly brings light to the detective's modesty and empathy.

Frequent pauses and performer exits between scenes makes Absolute Black feel unfluid and choppy, but Cate's direction works well during the most important parts of the plot. The production is wonderfully atmospheric with killer period costuming by Natalie Hyde, a sparse yet rich set and original music by Carmelita Thomas and Joshua Kranz. As is the tradition for Zombie Joe's, the production features lots of loud and gruesome surprises that make the audience utterly giddy.

When all is said and done, at the end of the day it is truly a pleasure to visit Zombie Joe's Underground - a venue that, despite its macabre leanings, is a warm, welcoming and completely endearing theatre marching to its own tune to the delight of its youthful patronage.