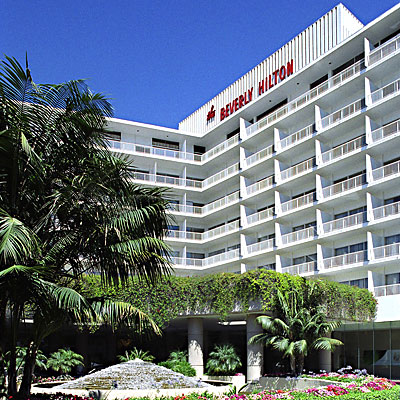 The Beverly Hilton will be the site of tonight's crimes against good taste and common sense as the HFPA decide what the best US TV shows are.
I'll be at the Golden Globes tonight in the lobby, press room, and covering the red carpet of the NBC after-party. Follow my tweets at @TheTVJunkie if the network holds out, follow @LAist for news about traffic rerouting and other info.

We've been looking at the nominations of the Hollywood Foreign Press Association and came up with our picks for winners along with some idea of our reasons why.

Best drama series:
"American Horror Story" - Super kinky, and Euros love that, a strong contender but with only Jessica Lange as the other nominee from the series, I don't think that it has the buzz required to win.
"Boardwalk Empire" - Looks great and Steve Buscemi won a Golden Globe last year but I don't think it's a winner this time.
"Boss" - Not sure who has seen this and if it's too U.S.-focused.
"Game of Thrones" - Potentially a surprise winner because of the European-based production.
"Homeland" - International material and the fact that the HFPA was so blown away by Claire Danes makes this: Will Win

Best comedy series:
"Enlightened" - Love the show but it's not a comedy: please please don't win.
"Episodes" - A lot of people are "wha?" but, again, this show has a European production connection, so it made it on the list. I like the show a lot but don't think it has enough steam to be a winner. It only aired 6 episodes or so.
"Glee" - Not a comedy and it wasn't that funny compared to the others on this list.
"Modern Family" - Of these nominees, "Modern Family" is the strongest and if the HFPA doesn't lose it's frickin' mind over Zooey Decshanel this show deserves the win: Will Win
"New Girl" - The show has potential but it isn't as strong as either "Episodes" or "Modern Family," the other true comedies in this list.

Best actress in a comedy:
Laura Dern, "Enlightened" - Not a comedy. Of all the performers listed here, she was definitely the strongest, but please please don't give awards in this category to performers who aren't in comedies.
Zooey Deschanel, "New Girl" - She's in a show that has potential but of everybody in this list, her performance has the greatest chance of being parodied. The HFPA is absolutely in love with her so I despair that they will go with her. Will Win
Tina Fey, "30 Rock" - From this list of nominees, this should be a fight between Tina Fey and Amy Poehler and while Tina had another great season I think Amy had a leg up on her as a performer.
Laura Linney, "The Big C" - Not a comedy. Please do not give Linney an award in this category. She's a great performer, and I love her but if the HFPA and TV Academy need to create a dramedy category or a 1/2-hour drama, then do that.
Amy Poehler, "Parks and Recreation"- An objective viewing of the work of these 5 actors would clearly show that Amy was the best in comedy last year. Will Win

Best actress in a drama:
Claire Danes, "Homeland" - She was great, no doubt about it, and the HFPA loves her which gives her the leg up. Will Win
Mireille Enos, "The Killing" - If the HFPA wasn't so in love with Danes I would say that Enos would be the winner in this category.
Julianna Margulies, "The Good Wife" - A strong contender with Emmys and a Peabody behind her but the show devolved into a bit of a soap opera last year.
Madeleine Stowe, "Revenge" - You can't be serious.
Callie Thorne, "Necessary Roughness" - I love Callie but would have liked to have seen her get a nom for "Rescue Me."

Best actor in a comedy:
Alec Baldwin, "30 Rock" - Consistently great - why wouldn't he win this? Because the show has been on "too long?" C'mon. Will Win
David Duchovny, "Californication" - Euros like the sexy time which is why Duchovny is on this list.
Johnny Galecki, "The Big Bang Theory" - Please do not give this show any more awards. I don't see how Galecki appeals to this crowd, it's ridiculous, but still possible that he will win.
Thomas Jane, "Hung" - Jane winning would be a tremendous "in your face" to HBO for canceling this series which had many great episodes over a couple rocky seasons.
Matt LeBlanc, "Episodes" - Matt was surprisingly great in this show but you couldn't call him the lead and there were so few episodes it would be difficult to say how much better he was than anybody else.

Best actor in a drama:
Steve Buscemi, "Boardwalk Empire" - He won last year and deserved it.
Bryan Cranston, "Breaking Bad" - Somebody would have to explain in front of an international court of law, how Cranston would not win this. Will Win
Kelsey Grammer, "Boss" - A great performance, perhaps a career-changer for Grammer, but can't touch Cranston.
Jeremy Irons, "The Borgias" - If this award was about old guys showing their asses, Irons should win. Irons is a great actor whose abilities are washed out by seemingly required multiple, yet senseless, sex and violence.
Damian Lewis, "Homeland" - He was great but his nomination seems to be part of the HFPA love affair with Claire Danes and the series in general. Compare Lewis (and any of the other actors here) against the gold standard that is Bryan Cranston.

Supporting actor:
Peter Dinklage, "Game of Thrones" - Won the Emmy and does seem to be a stand-out in this list. Euros love Guy Pearce, however, so... Will Win
Paul Giamatti, "Too Big to Fail" - Loved his performance but is often overlooked, I predict overlooking again.
Guy Pearce, "Mildred Pierce" - Has a strong history of support from Euro audiences.
Tim Robbins, "Cinema Verite" - Was good but perhaps not better than anyone else here.
Eric Stonestreet, "Modern Family" - Emmy winner for this role and has received a lot of good press but it feels like a Drama year at the Golden Globes.

Supporting actress:
Jessica Lange, "American Horror Story" - Such a great actor, fantastic in this bizarre series, a strong contender.
Kelly Macdonald, "Boardwalk Empire" - I love Kelly but I feel like the HFPA has turned away from "Boardwalk Empire" this year.
Maggie Smith, "Downton Abbey" - There is a love affair with this show that's isn't reflected in the nominees this year so I think she will get this. Will Win
Sofia Vergara, "Modern Family" - Very funny but not stronger than anybody else in this list.
Evan Rachel Wood, "Mildred Pierce" - I think the time for this show has passed.

Best movie or miniseries:
"Cinema Verite" - Nice but I don't think that Euros gave a crap.
"Downton Abbey" - Will Win.
"The Hour" - What is this?
"Mildred Pierce" - I can't really see this winning and not sure why it's here.
"Too Big to Fail" - Really great, probably the best here, but not enough coverage.

Best actor in a TV movie or mini:
Hugh Bonneville, "Downton Abbey" - He was good but I'm not sure he was a standout.
Idris Elba, "Luther" - This could be the surprise winner. Elba was fantastic in this show and since it's Euro-based this could be the gift that Euros give themselves. Will Win
William Hurt, "Too Big To Fail" - Probably had the best performance in this list if looked at objectively.
Bill Nighy, "Page Eight" - Another from the Euro camp but not with the hype "Luther" have.
Dominic West, "The Hour" - I plead ignorance to his performance.

Best actress in a TV movie or mini:
Romola Garai, "The Hour" - Not enough hype about this.
Diane Lane, "Cinema Verite" - Not enough hype.
Elizabeth McGovern, "Downton Abbey" - Will Win
Emily Watson, "Appropriate Adult" - She was great, I have some hope for this.
Kate Winslet, "Mildred Pierce" - The Euros love love love her, she could pull a surprise win for this mediocre mini-series.