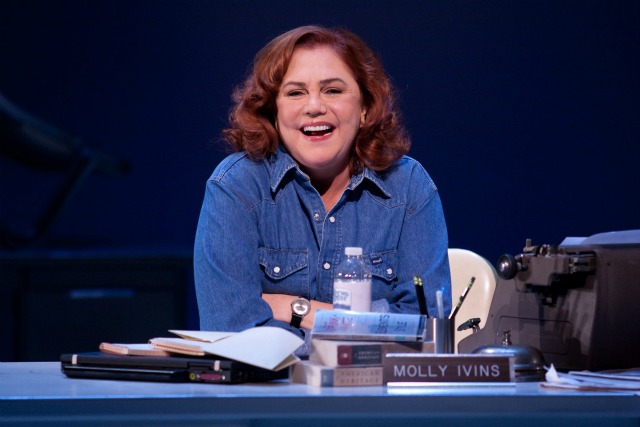 The left coast premier of the biopic work Red Hot Patriot: The Kick-Ass Wit of Molly Ivins is currently playing at the Geffen Playhouse. The ever-smoky Kathleen Turner resurrects the saucy journalist through this staged adaptation by twin-sister playwrights Margaret and Allison Engel. Red Hot Patriot is a one-woman (well, mostly) play that features Turner's energetic portrayal of Ivins, excellent comedic timing, and crisp direction. Although the production has many wonderful qualities, the one-dimensional script lacks imagination.

Turner is fabulous as Ivins, precisely channeling the late writer in spirit and raw vitality. She captivates her audience with an encapsulated rendering of Ivins that bears not only a spot-on impersonation of outward mannerisms, but captures the essence of Ivins' passion for grass roots activism, politics, and life itself. Red Hot Patriot is a challenging one-woman performance that requires constant flux between moments of somber reflection and lacerating humor. Turner handles the demands of the work beautifully with tremendous stamina, and even a little well placed in-character ad lib banter to realize Ivins with empathic care and and a perfected execution.

Direction by David Esbjornson is coherent and flawless. Overall, Red Hot Patriot is a viable play — certainly a must-see for Turner and Ivins fans alike. Unfortunately the script is shamelessly unimaginative. While obviously meant to be an homage to a great political commentator and activist, the work is basically a rehashing of Wikipedia's Molly Ivins entry, peppered with the clever one-liners that pop up during a video search for Ivins' public appearances. Margaret and Allison Engel probably shouldn't even be credited as writers for the work because all of the brilliant, witty, and heartening lines of the play belong to Ivins herself. The staging of the work relies on cliche devices, terrible made-for-TV style music cues, and the awkward presence of a superfluous, silent helper (played by Matthew Vas Oss).