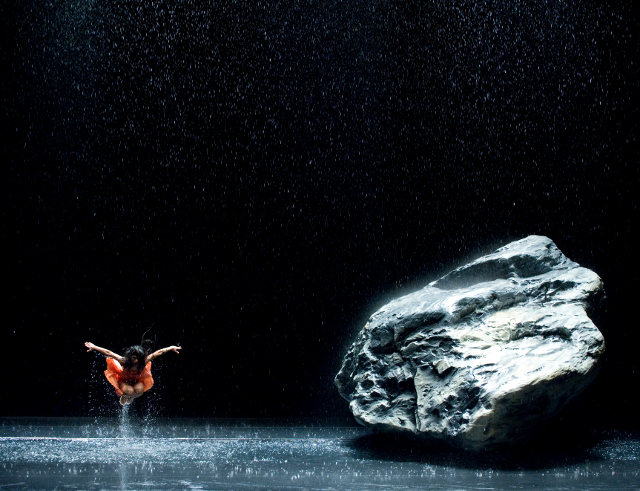 Most 3D filmmakers still use the format to focus on explosions & exploitation. Unless they're German documentarians. In Cave of Forgotten Dreams, Werner Herzog trained his 3D cameras on the oldest human art, and now Wim Wenders (Buena Vista Social Club, Wings of Desire) captures the power of kinetic theater in Pina, Germany's official submission for the Oscar. For those unfamiliar, Pina Bausch was a German-born, Juilliard-trained choreographer renowned for introducing unconventional objects - chairs, leaves, water, dirt - into the modern dance stage. Additionally, her work is propelled by bold, sexual interplay between male & female bodies. Cinephiles may recognize her work from the opening of Pedro Almodóvar's Talk to Her.

Sadly, Pina Bausch passed away days before filming began. Rather than eulogize her with talking heads, Pina lets her legacy speak for itself with full performances of her pieces by dancers who had worked closely with her for decades. Wenders' decision to shoot in 3D highlights the format's unique ability to capture dance's kinetic energy, as anyone who caught Step Up 3D during its theatrical run two summers ago can attest (really!). Now imagine that completely divorced from bright lights & silly stories, and instead channeled completely into raw, revolutionary performance. Pina opens exclusively at Arclight Hollywood & The Landmark.

Sing Your Song is another documentary about powerful performers. Its subject, Harry Belafonte, is immortalized for the calypso classic "Day-O (The Banana Boat Song)" and a multi-genre output on stage & screen that extended from the 1950s to the 2000s. Sing Your Song links Belafonte's artistic work back to an activist drive, detailing how he used the spotlight to advocate for human rights every step of the way - from the Civil Rights Movement to the engineering of "We Are The World" to community organization against the Iraq War. The film plays for one week at Laemmle's Pasadena Playhouse.

The themes of music & unity even loosely carry over into wide releases. Joyful Noise pits Queen Latifah against Dolly Parton as rival choir directors who must come back together for the good of their community & lovestruck grandchildren. Their star personalities augment what looks like an otherwise-standard "let's put on a show" story, though it should be noted writer-director-actor-musician Todd Graff is well-seasoned in inspirational musicals. He started out performing on Sesame Street & The Electric Company, and Joyful Noise follows his work as writer-director on Camp & Bandslam.

To circle back to 3D, we close with Disney's retrofitted re-release of Beauty and the Beast. As with the recent naked cash-grab successful re-release of The Lion King, is it really necessary? If your answer is "yes", you really ought to catch it at the El Capitan. As you probably know, the all-Disney, all-the-time theater features a live organ & short stage show before every screening. For Beauty and the Beast, there's a live appearance from "Belle", and would-be Gastons can even share five dozen eggs with her at the VIP "Breakfast with Belle" events every Saturday & Sunday morning.

Speaking of beauties, feast your eyes on LA's bounty of revival houses, film festivals & midnight movies in our weekly Film Calendar! See you at the movies!