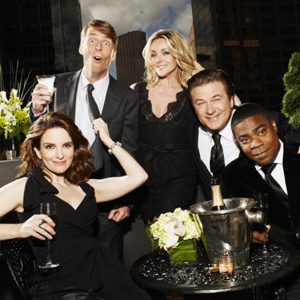 "30 Rock" is part of tonight's returning NBC lineup which will not include "Community," unfortunately.
Last night the People's Choice Awards aired, not something that we follow because when you look at the choices people make, it makes one afraid of people. The showrunners of the People's Choice Awards must have anticipated my attitude because they sent me an email declaring that I had been declined credentials to cover the 2012 event which is really hilarious because I never applied for credentials. What's sad/distressing about the People's Choice is that shows like "2 Broke Girls" win. I was at the Television Critics Association "2 Broke Girls" session earlier this week which devolved into a display of offensive ignorance by showrunner Michael Patrick King who thinks it's ok to put up racist stereotypes every week because he's gay. Nobody would care about this if the jokes were funny, which they aren't. The public has fallen for the series' stars, Kat Dennings, Beth Behrs, who are indeed, lovable, but they operate in a pathetic, lowest-common-denominator world that exemplifies the current comedies of CBS.

Tonight we have the Critics' Choice Movie Awards which I went to last year. While I got to talk to Mark Duplass and Katie Aselton from FX's "The League," this was a poorly produced show, from both the red carpet and inside-the-theatre perspectives, that I didn't care to attend until I hear more positive feedback from fellow journalists. This doesn't mean that I don't recommend watching it on TV (tonight at 8pm on VH1) because we have the incredible talents of both Paul Scheer and Rob Huebel working as hosts for the night. Scheer has popped up at a number of awards shows over the past few years and he has a real affinity for them - I hope this goes well for him tonight because, for chrissakes, we need to find a replacement for Billy Crystal at some point this century.
—-
Hey, watch "Chelsea Lately" (E! at 11pm) tonight as I'm the bearded guy in the front row and if you're familiar with my laugh you'll hear it throughout the show. Sarah Colonna, Bobby Lee, and Matt Braunger were on the roundtable and Bill Maher is the guest. Bill Maher's "Real Time With Bill Maher" returns to HBO on Friday with guest Herman Cain.
—-
The New York Times had an article today about comedian Eddie Brill whose primary duty is to book comedians for "The Late Show With David Letterman. While I don't doubt Brill's assertions that his quotes were taken out of context, I think Brill finds comedians that fit the mellower and mid-western tones of the show that Letterman has settled into over the past 10 years. It is still inexcusable that only 1 out of 22 of the comedians that appeared on Letterman in 2011 was a woman. There are a lot of funny women out there who would be great for the show, how about Kathleen Madigan for example? She'd be great on the show. Do it Eddie!

Also, why the heck were there only 22 comedians on Letterman last year? Why aren't there at least 4 shows a month with a comic on them? There would be more women if there were more shows booked with comedians - why is David Letterman turning his back on the industry that got him started?
—-
The TV Junkie Must-Watch Plan: "30 Rock," "Parks and Recreation," "The Office," "Up All Night," "Kevin Hart: Seriously Funny," "Chelsea Lately," "Conan" (2nd half), "Late Night With Jimmy Fallon"

9:30pm Up All Night NBC - Season Premiere. New Year's Eve Reagan embarrasses Chris with her competitiveness during a New Year's Eve game night; Kevin thinks Ava is ashamed of him; Missy shows up with an unexpected date.