TV Junkie: 'Are You There, Chelsea?' Premieres Tonight; The PaleyFest2012 Lineup 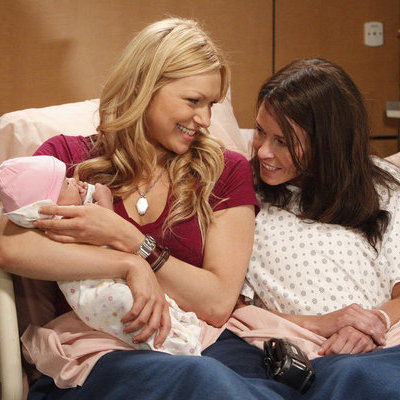 Tonight NBC premieres "Are You There, Chelsea?" at 8:30pm
Tonight at 8:30pm NBC debuts "Are You There, Chelsea?" the sitcom series loosely based on Chelsea Handler's best-selling autobiographical book Are You There Vodka? It's Me, Chelsea. A year and a half ago I got some screeners of NBC's first attempt at this show and it wasn't very good for a lot of reasons. I thought that NBC had let us see too much too soon. The version I saw then didn't air and what we get tonight is something that has been considerably reworked for the better. Yes, it's still a 3-camera "classic" style sitcom but it's somehow less static and more organic than the examples provided to me 18 months ago. Laura Prepon (of "That '70s Show") plays a younger version of Chelsea Handler while Handler plays Sloane, Chelsea's older sister.

If it looks confusing, it is, but only if you are moderately aware of Chelsea Handler's career as a stand-up comedian and host of E!'s "Chelsea Lately." If you are a Handler fan, it's not too difficult to keep things clear.

Other notables in the cast are Lenny Clarke, who has lost of ton of weight since his shift as a fireman on FX's "Rescue Me" ended last year, who plays Chelsea's (Laura Prepon's) father; comedian John Caparulo, a reliably funny regular on "Chelsea Lately," who plays a frequent patron of the bar that Chelsea works at; and Ali Wong, another excellent comic, who plays Chelsea's friend and co-worker at the bar. This is a really good cast... but the standout performer is Chelsea Handler herself which is great, right? It is except for the fact that she is not a series regular, she is scheduled to only be in 7 episodes this season. I've only seen 2 episodes of the show but I feel that episodes without Handler will sorely be missing her presence.

Is "Are You There, Chelsea?" a great show? It's not "out of the gate great" by any stretch but it has a lot of potential - it's certainly not a disaster (think "Work It"). Everybody is a solid performer and the writers are capable enough to have put together a premiere that NBC didn't have a problem airing at 8:30pm. That begs the whole question of why is Chelsea Handler producing a show on broadcast TV, with all of the restrictions and interference broadcast TV is known for? Watching "Are You There, Chelsea?" makes me wonder what kind of show an unfettered Handler would have created for FX, or better yet, an HBO or Showtime.

While I can continue to dream about those kind of arrangements, what we have is "Are You There, Chelsea?" on NBC on Wednesday nights at 8:30pm. Handler fans are a committed bunch so they can be counted on to support the show and I think that there are enough hooks, even in the first few episodes, for the average viewer to consider adding it to their lineup of Wednesday shows. This might provide enough viewership for the writers to be granted some more leeway and more time/money for the studio to negotiate for more appearances by Handler as she has displayed some remarkable talent. I'm willing to give the show more time to prove that there's a middle ground between the boutique Thursday night NBC lineup and the Monday night CBS dog food and I wish them the best.
—-
The Paley Center for Media has announced the full lineup of shows that will be part of the PaleyFest2012 celebration:

I'm really surprised to see "Community" and "The Vampire Diaries" on the calendar again as they both were just on in 2010 but I'm not complaining. If you are a fan of any of these shows, you need to go to PaleyFest2012 as you will not have access to the kind of insight and Q&A sessions anywhere else other than, perhaps, ComiCon, which can be a hellish experience. More info on ticketing and packages is available at the Paley Center's website.
—-
The TV Junkie Must-Watch Plan: "Nature," "Modern Family," "Happy Endings," "Conan," " Late Night With Jimmy Fallon"

8:00pm Whitney NBC - Season Premiere. New Day/Time. Private Parts Whitney is upset when Alex won't give her the password to his phone; Whitney finds Alex in an awkward position; Lily has jitters about her new living arrangement.

8:30pm Are You There, Chelsea? NBC - Series Premiere. After getting a DUI, Chelsea and her best friend find a third roommate and an apartment closer to the bar where she works; Chelsea's pregnant sister worries that she can't count on her.

10:00pm Face Off Syfy - Season Premiere. Return to Oz A challenge to recreate the four main characters from the book, "The Wonderful Wizard of Oz."