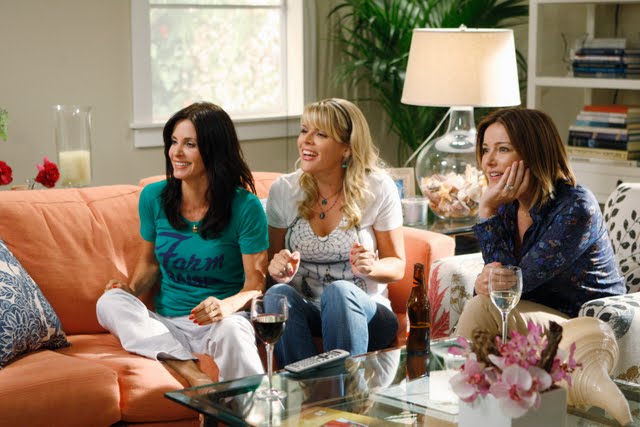 The stars of "Cougar Town," it's fans, and TV journalists are all looking for answers from ABC about why the show has been off the schedule and when will it be back, for real?

"Cougar Town" series co-creators Kevin Biegel and Bill Lawrence employed some guerilla tactics last night by hosting an non-ABC controlled/sanctioned get-together at the Television Critics Association host hotel. Paying for drinks and food with the show's stars and writers in the intimate hotel bar at the one location on earth with the highest concentration of TV critics on the planet in order to get your at-risk show back in the news was definitely a smart move with good results if you happen to peruse entertainment and news sites today.

I have a full interview with Ian Gomez coming up here at LAist but I also had a good time chatting with Brian Van Holt aka BVH who plays Bobby Cobb on the show. Cobb has been very surprised at the male fandom the show has generated and he has found himself accosted by everyone from burly baggage handlers at the airport to manly surfers out in the frigid Pacific asking him "When is 'Cougar Town' coming back?!" ABC has said that the show is "likely to return in March" but has not committed to this as there is no premiere date set or any further information about the show available.

That's a damn good question that ABC hasn't done a good job answering. "Cougar Town" has been a successful series for the network that transformed itself from a 'Courteney Cox vehicle' to a true ensemble-powered show with appeal beyond the assumed-40+ year-old female demographic. The longer the show is on indefinite hiatus the less audience is retained and the more difficult it will be to bring them back if the show resumes airing. It's a self-fulfilling prophecy for the network to deliberately put a show on hiatus that it then becomes at-risk. NBC has also been engaging in this behavior so ABC is not alone in this douchebaggery.

Follow me on Twitter at @TheTVJunkie for live updates from the TCA and of course, always follow @LAist for all updates about LA.
—-
The Two Gregs: A reminder that tomorrow night comedy and TV star Greg Proops will be hosting his free live podcast recording of "The Smartest Man In The World" at the Bar Lubitsch at 7pm @ 7702 Santa Monica Blvd. | Next week, multi-Emmy-winning TV writer and now host of the Speed Channel's "Pumped," Greg Fitzsimmons has a very special hour of comedy to present at the Laugh Factory on Wednesday, January 18th, at 8pm, 8001 W. Sunset Blvd. And then on Thursday Fitzsimmons will be hosting his live podcast recording at the UCB Theatre, 5919 Franklin Ave., Thursday, January 19th, at 6:45pm. I've been to 2 of Fitzsimmons' live podcast recordings, they are a blast and he always has amazing guests from the world of comedy and TV.
—-
Tonight Chelsea Handler is very busy with a new "Chelsea Lately" with a power-trio of her in-house comedians, Jeff "Jiffy" Wild, Josh Wolf, and Heather McDonald and then Handler will be on "Conan" where I think she'll push the limits of basic cable vs her appearances on the likes of "The Tonight Show," etc.
—-
The TV Junkie Must-Watch Plan: "Hidden City," "Parenthood," "Chelsea Lately," "Conan" (2nd half), "Late Night With Jimmy Fallon"

9:00pm Dirty Jobs Discovery - Barber's Assistant Mike learns some of the tricks of the haircutting trade; Mike spends the day working as a landfill operator.

9:00pm Hidden City Travel - San Francisco: Zodiac, Harvey Milk, Gold Rush & the Committee of Vigilance Marcus examines the murder of Harvey Milk; getting into the head of the Zodiac killer; crime and corruption of the '49ers gold rush era

10:00pm Parenthood NBC - Just Smile Crosby is upset when the newspaper's article on the Luncheonette becomes about Adam; Amber tries to find her place

10:00pm Chopped Food - Far Far Out! Processed food in the appetizer basket; Indian snack food in the entree round.