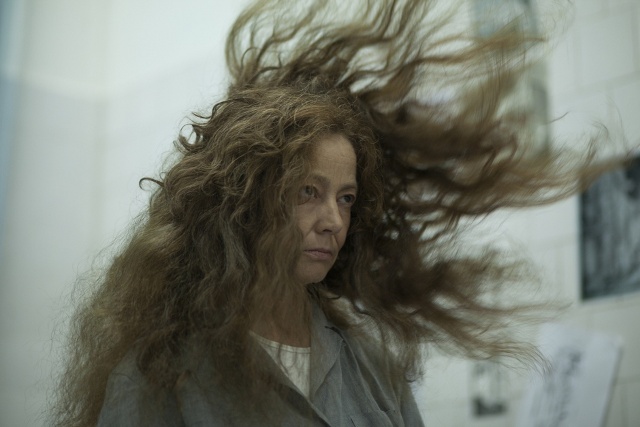 Suzan Crowley's a creepy crawly in this still from THE DEVIL INSIDE. Courtesy Paramount / Insurge Pictures

The New Year's off to a frightful start with The Devil Inside. Paramount's micro-budget exorcist pic might best be called The Last Exorcist 2: This Time It's Personal. Like that horror hit, The Devil Inside uses the found footage format to follow an Italian woman (Fernanda Andrade)'s struggle to free her mother (Suzan Crowley) from a Vatican-sponsored asylum. The officials believe the old woman's dangerous, but she claims to be possessed. Either way, three people died during her botched exorcism years ago, and it's all just a little bit of history repeating. The beginning of the year is traditionally a studio dumping ground, but The Devil Inside continues a curious trend of early year religious horror: The Reaping, The Rite, The Unborn & even Legion. Call it a Christmas backlash.

From a faux-documentary to truly raw filmmaking, still photographer Kurt Markus stages a little ditty about John Mellencamp, It's About You. Shot in Super 8, the film is no standard concert film. Rather, it's a guided tour through the backwoods & blurred histories of America, one tune at a time. Mellencamp felt so confident about their collaboration that he played the film in full every night on his last tour as the opening act. Yet, according to Gordon and The Whale's review at SXSW last year, It's About You is "really about Markus and his process". Whichever camp you fall in, It's About You opens exclusively at Laemmle's Music Hall.

Here at LAist, It's Always About You (you knew it was coming!). Will you start your 2012 moviegoing with a new release, a revival (in case you missed it, here's our weekly guide to the best!) or just stay home?