City Wants to Give the Occupy LA Mural Back. You Want It? 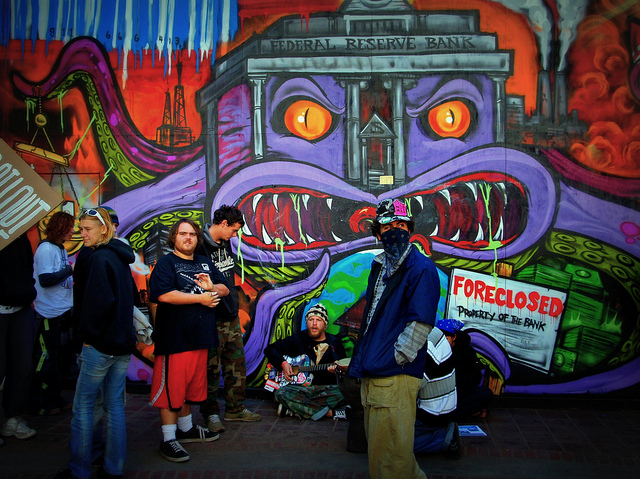 Any physical vestiges of the Occupy LA City Hall encampment are slowly fading, as the park has been cleared for over a month now and plans are underway to replace the lawn. But what of the giant mural that once stood in the center of the camp, painted in bold colors (and making a bold statement) on the plywood set up to protect the fountain? Well, the City is ready to give it back to...well, they aren't sure. But they don't want it anymore.

The mural in question is one that Mayor Antonio Villaraigosa hailed post-raid as being an important visual element and piece of local history.

The artwork illustrates the worldview of the Occupy protesters. An angry, greedy octopus crowned by the federal reserve bank uses its tentacles to reach out to take a cut of money from foreclosed homes. There are oil derricks and an industrial skyline belching fumes in a dystopian scene. The call to action is: "Take the power back."

"The mayor's office recognizes that this has historical significance so we're working together to make sure that we come up with a good and appropriate solution," said Olga Garay-English of the Department of Cultural Affairs (DCA) in December.

Now the DCA is done holding onto the wooden "structure" and has released a call for letters of interest for people to take ownership and potentially display the "Occupy LA artifacts."

Occupy LA posted the email from the City referring to the DCA's call:

"The mural belongs to all of us," writes Occupy LA on their site.