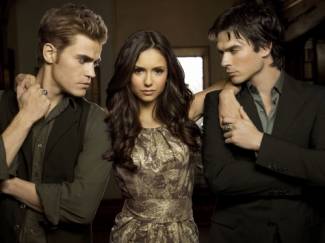 "The Vampire Diaries" is one of a few premieres tonight as the networks take a breather.
Season premieres have taken the night off other than teeny-bopper fave "The Vampire Diaries" and some new episodes of "Alaska: The Last Frontier" and "Man, Woman, Wild" on Discovery. Also, TCM has a great documentary on cinematographer Jack Cardiff (The Red Shoes, The African Queen, Death on the Nile) you should check out and late night TV is firing on all cylinders again with good guests on "Chelsea Lately," Letterman and Fallon.

I highlighted a bunch of live shows in LA that you should check out and it turns out that Eddie Pepitone's Bloodbath #8 at the Improv Lab is sold out tonight but you could still see him at the Hollywood Improv tomorrow night. Tonight you still can see TV and podcast star Greg Proops at Nerdmelt for his live podcast show. Also, our friend Greg Fitzsimmons, whose TV show "Pumped" is on the Speed Channel today at 4pm, will be doing a special show at the Laugh Factory on Wednesday the 18th that I highly recommend - he's got a ton of new material and it's killer.
—-
Be sure to follow our Twitter feed as we'll be at the premiere of "Portlandia" in New York City. We'll have tweets and photos as the night progresses starting at about 4pm Pacific.
—-
The TV Junkie Must-Watch Plan: "Pumped," Cameraman: The Life & Work of Jack Cardiff, The Four Feathers, "Chelsea Lately," "Chelsea Lately," "Late Show With David Letterman," "Late Night With Jimmy Fallon"

8:00pm The Vampire Diaries The CW - Season Premiere. The New Deal Klaus uses violence to convey that no one will be safe until he gets his family back; Tyler tries to cope with recent changes

9:30pm The Four Feathers TCM - (1939) An English officer (John Clements) fights in the Sudan after receiving white feathers of cowardice from friends