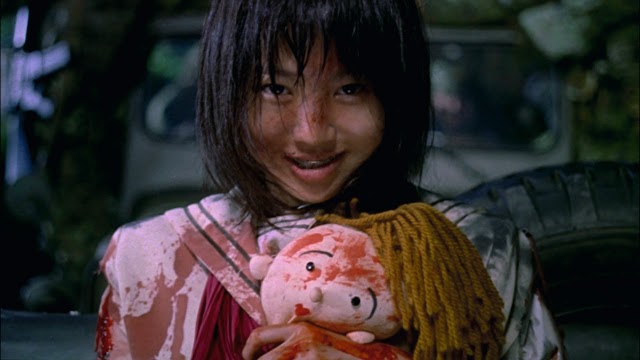 A contestant gets the upper hand in BATTLE ROYALE. Courtesy Toei Company.

The French New Wave of the 1960s is among the earliest schools of film fans turned filmmakers. The post-WWII French public couldn't get enough American b-pictures, and like any star-crossed lover, produced hand-made tributes to their betrothed. Auteur Jean-Luc Godard epitomized this love in his works, which ditch little things like "plot" to twist the very nature of film itself. It's artsy, even fartsy, but it doesn't care who it offends along the way to gleeful cinematic anarchy.

In a catalogue that includes Breathless (which gave the world the jump cut) and Band of Outsiders (whose original French title, Bande à Part, lives on as the namesake for Quentin Tarantino's production company), 1967's Week End is among his most unhinged. A savage critique of society's collapse into greed, bouts of crime, cannibalism & revolution punctuate the film's Brechtian distance, as does the ultimate in gallows humor: a seemingly endless shot of a traffic pile-up that bounds from one bizarre sight-gag to another until the bored motorists meet a bloody collision - and just keep driving. Week End plays all week in a newly-restored print at the Cinefamily.

Battle Royale brings a story to its gory satire. A spiritual ancestor of The Hunger Games, the film is set in millennial Japan, where a randomly-chosen high school class awakens on a desert island. Each has an explosive collar around their neck and a sack packed with weapons ranging from machine guns to samurai swords to...pot lids? The film's bloody battles are perfectly balanced by pitch-black comedy, embodied by real-life stand-up-comedian turned yakuza film director Takeshi Kitano as a jaded teacher who glibly rattles off names of dead students while encouraging the living to keep up the killing! Battle Royale continues its first-ever U.S. theatrical run, also at the Cinefamily.

(NOTE: The Cinefamily screens Battle Royale in its original 2D, not the 3D conversion mentioned at the end of this trailer.)

For modern day film fans turned filmmakers, one of the biggest names is JJ Abrams. Super 8, his first original story, pays it back to the Steven Spielberg films he grew up with and the amateur films he made growing up. Whether you missed it last summer, or you're drawn to see it again, the Aero has an additional attraction this Saturday. Abrams himself hosts a post-screening discussion, alongside several members of the cast.

The New Beverly offers some super 2011 catch-up of its own. The theater pairs Pedro Almodovar's tense thriller The Skin I Live In (one of our favorite films of 2011) with his 2009 drama Broken Embraces on Saturday & Sunday night. Tomorrow, it's a double dose of death row docs with Werner Herzog's Into the Abyss and Errol Morris' Mr. Death: The Rise and Fall of Fred A. Leuchter, Jr, which profiles the inventor who reinvigorated the electric chair.