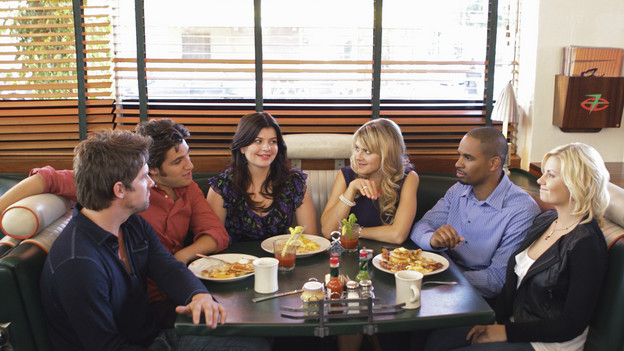 We wrote about the death of prolific comedy writer and producer Joe Bodolai a week ago and on the Facebook page created to celebrate his life, I noticed that there will be a get together in his honor tonight at 8:00pm, at the Kibbitz Room on Fairfax (inside Canter's) on North Fairfax Avenue. There'll be food and friends and fond memories.
—-
New York Magazine is right to point out that of the 20 shows and 7 stand-up specials slated for Comedy Central in 2012, only one stars a woman (Amy Schumer). There are a tons of hilarious women out there both on stage and on-camera that shows could be built around and Comedy Central has the know-how to make them funnier than "Whitney." How about Maria Bamford, Bonnie McFarlane, Sarah Silverman and/or her sis Laura Silverman, Lisa Lampanelli has had success on the network, I came up with these in about 3 seconds and could add a couple dozen more if I didn't have a deadline on this post.
—-
Winter seems to finally have hit the East Coast and LA has already had its share of cold snaps (although you wouldn't know it today) so we've got to ask when is winter coming to HBO's "A Game of Thrones?" Unfortunately the show doesn't come back until April but we've noticed that you can pre-order season 1 on DVD and if you do it soon HBO throws in a bonus DVD of interviews and a documentary of how the artists behind the show created the look and feel of the world in "A Game of Thrones." Yaah, you won't get the DVD until March but perhaps your anticipation of the DVD can distract you from your anticipation of the return of the show. Good luck and may you not run into the path of a White Walker.
—-
Almost 2 years ago exactly I questioned Martha Stewart's move to Hallmark and today the network announced cancellation of "The Martha Stewart Show." This doesn't mean that all Martha Stewart Omnimedia shows will be cancelled but shutting down the flagship program means that Stewart didn't answer the questions I posed when the deal was first announced. Stewart is unquestionably a star and will find a new home for her show, the question is where and what will she be giving up?
—-
ABC returns with episodes of its good comedies tonight ("Modern Family," "Happy Endings") in marked contrast to last night's unveiling of "Work It." You can get lots of good late night tonight including a double dose of the RZA on both "Chelsea Lately" and "The Late Late Show with Craig Ferguson." The RZA plays a major part in the upcoming season of Showtime's "Californication." Am pleased to see Chris Franjola on the Chelsea roundtable tonight, along with Whitney Cummings who is always great in that venue despite what people have to say about her show, and the always put-upon-yet-hilarious Gary Valentine rounds out the trio.
—-
The TV Junkie Must-Watch Plan: "Modern Family," "Happy Endings," "The Soup," "Chelsea Lately," "Conan" (2nd half), "The Late Late Show With Craig Ferguson"

8:30pm Suburgatory ABC - Driving Miss Dalia When Dalia hires Tessa to drive her around to stalk her crush, Tessa ends up developing feelings for the guy; George's decision to join the country club puts stress on his relationship with Noah.

9:00pm Modern Family ABC - Lifetime Supply When Phil misses a call from his doctor with test results, he immediately assumes the worst; Javier stops by to take Manny to the horse races; Mitchell's winning of an environmental law award sparks a competition.

9:00pm NOVA PBS SoCal/KOCE - Deadliest Volcanoes Scientists attempt to determine when volcanic eruptions might occur and how dangerous they may be.

9:30pm Happy Endings ABC - The Shrink, the Dare, Her Date and Her Brother Dave has a surprising reaction when his shrink (Ken Marino) starts dating Penny; Max and Jane's fight over a sweater leads to a strange competition; Alex and Brad bond when they discover a shared interest.

9:30pm Inside Portlandia IFC - Memorable clips from Season 1 and exclusive, behind the scenes footage.

10:00pm The Soup E! - Joel McHale & Co. continue to be one of the best things about Wednesday nights.