TV Junkie: CBS is Back With New Episodes; Podcast 'Best of' List 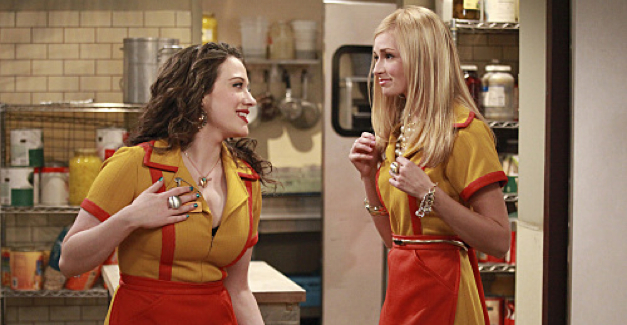 CBS is back with new episodes tonight including "2 Broke Girls" at 8:30pm

CBS is launching aggressively into the new year with a lineup of new episodes for tonight. Late night is still sparse but we've still got the very reliable "Chelsea Lately" and it looks like Craig Ferguson is back as well.
—-
I've got a beef with the AV Club's "Best Podcasts of 2011" post: While I appreciate how difficult it sometimes can be to string together a "best of" list of any kind I can't seem to figure out the criteria the AV Club's voting pool used to make their picks. First of all, several of the podcasts are actually radio shows ported to podcast so those shouldn't be allowed on the list, then there seems to be a cop out of several shows "tying" - if there was a chance to exercise editorial control, that was it.

Of course, they did pick some undeniable winners like Marc Maron's WTFpod, Scott Aukerman's Comedy Bang Bang, and Chris Hardwick's Nerdist, but here are a few that should have made the list:

Bill Burr's Monday Morning Podcast - Comedian Bill Burr just sold out Carnegie Hall in November, who on the AV Club's list has done that? Burr very occasionally has guests so it's all about him bringing an hour of always-unapologetically confrontational funny to your ears every Monday.

Greg Proops' The Smartest Man In The World - Sometimes Greg goes into the political, sometimes he castigates celebrity culture, sometimes he delves into the history of classic film or the history of negro league baseball, but he's always entertaining. One of the great things about the Proopcast is that it's always recorded before a live studio audience. Usually Greg holds court at Bar Lubitsch in WeHo but this week he will bring the podcast to the Nerdist Meltdown Theatre on Thursday, January 5th - don't miss it!

Here are other shows that should have been in the running: Greg Fitzsimmons' Fitzdog Radio (amazing/sometimes-surprise guests & individual commentary); anything from MaximumFun.org, particularly Jordan, Jesse, Go! and Stop Podcasting Yourself, very funny shows with great guests and topics; Paul Scheer's How Did This Get Made? on the Earwolf network; how about some stuff off of the Riotcast Network (formerly Glory Hole Radio) with some of the toughest and quickest comedians out there like Robert Kelly's You Know What Dude, or the husband-wife team of Rich Vos and Bonnie McFarlane on My Wife Hates Me or live podcasts from one of the best comedy clubs on the planet, The Comedy Cellar in NYC; or, for Pete's sake, something from Kevin Smith's Smodcast network, like Jay Mohr's Mohr Stories.

As you can see, there are plenty of podcasts to choose from without having to resort to ported radio shows. Hopefully the AV Club will work out the kinks by next year.
—-
The TV Junkie Must-Watch Plan: "The Layover," "Rock Center With Brian Williams," "Chelsea Lately," "The Late Late Show With Craig Ferguson"

8:00pm How I Met Your Mother CBS - Season Premiere. Tailgate Marshall goes to his father's grave for New Year's Day tailgating; Barney and Ted open a bar; Robin fills in for a news anchor.

9:00pm Fear Factor NBC - Snake Bite The teams face stunts that include retrieving flags in a car suspended in the air by helicopters and drinking an insect concoction.

9:00pm Two and a Half Men CBS - Season Premiere. Slowly and in a Circular Fashion When Walden's mother (Mimi Rogers) and ex-wife (Judy Greer) try to take over his company, he turns to Alan for help.

9:00pm The Layover Travel - Amsterdam Tony meets some new friends and discovers that there's more to Amsterdam than just the red light district.

9:55pm Hawaii Five-0 CBS - Season Premiere. Ka Ho'oponopono When a teenager is murdered, the team must determine why she was targeted and if the person responsible was a hired professional.

10:00pm Rock Center With Brian Williams NBC - The rise in the cost of farmland; lobster divers in Honduras; actors Fred Armisen and Darrell Hammond; the cleanup after New Year's Eve in Times Square