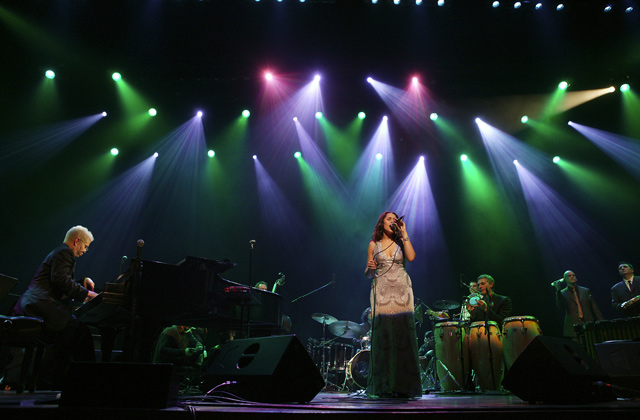 Any evening with Portland-based "little orchestra" Pink Martini is a party, and their two New Year's Eve shows at Walt Disney Concert Hall will be the perfect way to welcome 2012.

The band, which is known for its genre-traversing music, released two albums this year—A Retrospective, the perfect compilation for longtime fans as well as those new to Pink Martini, and 1969, a collaboration with Japanese vocalist Saori Yuki.

Yesterday, LAist spoke with Pink Martini lead vocalist China Forbes—whose gorgeous voice is a force to be reckoned with—to discuss her recent vocal cord surgery, why she loves L.A.'s music venues, and what to expect on New Year's Eve.

Pink Martini fans were thrilled to hear you'd be performing in L.A. on New Year's Eve, as it could have taken you until next summer to recover from vocal cord surgery. Did that whole experience give you a new perspective on singing live?

It definitely changed my perspective. On a technical level, I'm so much more careful with my voice. I got to the age of 41 without ever having a major problem with it, so I feel quite lucky because I'm not a trained singer. But it was still tough to hear the news that I needed vocal cord surgery, and my first reaction was, "I've been doing everything wrong! I've been a horrible singer and never knew what I was doing!"

How did you recover from that?

Well, I went through this difficult period of doubt, but then after the surgery, everything healed really well and there was no scar tissue of any kind. So I started re-approaching singing, and realized I didn't have to start from scratch and relearn everything.

It turned out I just needed to make a couple tweaks that weren't too hard. So now it feels like my singing has never been better, and it's thrilling to know that any barriers I had are gone, and I can enjoy it more. Although it wasn't always easy, this whole experience was probably the best thing that could have happened.

A Retrospective contains a fabulous mix of Pink Martini music through the years, in addition to some previously unreleased tracks. Was it hard choosing which songs to include on the album?

Normally, it would've been hard, but Thomas [Lauderdale, Pink Martini founder/pianist] really took the reins because I was down and out with the vocal cord injury. I was really happy that he put in "The Man With the Big Sombrero," which we did for the Quentin Tarantino film Inglourious Basterds. They didn't end up using it in the film, so we were just sitting on it and it wouldn't have been heard otherwise. And I love that he chose the "Aspettami" version with just the two of us, because I've always loved how intimate it feels.

Your multicultural holiday album, Joy to the World, has gotten some great play over the last year, and it's nice that Ari Shapiro (of NPR) got to return for a couple songs on that disc. What do you most enjoy about collaborating with him?

He's so fun. Thomas describes him as the perfect human specimen—physically, intelligence, personality, you name it. You want to have him cook you dinner, or accompany you to a concert, or go out for drinks. He's so much fun, and the fact that he can sing so well is just a cherry on top.

Getting back to A Retrospective, it's nice to have Thomas' Polaroid photos featured throughout the booklet. That led me to wonder if you were able to pursue any hobbies as you were recovering from surgery…

The number one thing I was looking forward to with my time off was spending time with my son. And going into it, I also thought, "I'll have all this time to do all the things I've always wanted to do but never had time for." But when I was actually recovering, I couldn't remember any of those things! Now that I can sing again, it's all come back to me—pottery, painting, making my own clothes…

Have you made your own clothes before?

Yes, I made my own dress and wore it on Leno. It was so much fun. I'd like to make another one for the show at Disney Hall, but I don't think I'll have time. Perhaps after my son goes to bed tonight, I'll stay up late and try to do it. It's either that or watching The Help on DVD. We'll see.

Speaking of your son, what's his favorite song for you to sing?

He loves "Amado Mio," but when it comes to what he likes to sing, it's Katy Perry's "Teenage Dream."

Is it true that you set the ABCs to "Isn't She Lovely" for him?

Yes, because I was obsessed with Stevie Wonder last Christmas as I was learning to play songs on the piano, and the chord progression for "Isn't She Lovely" is so great. With that version, we alternate between doing it Stevie style and Latin style, with my husband on congas.

That sounds like so much fun! It's great that you cover multiple genres at home as well as in the band. 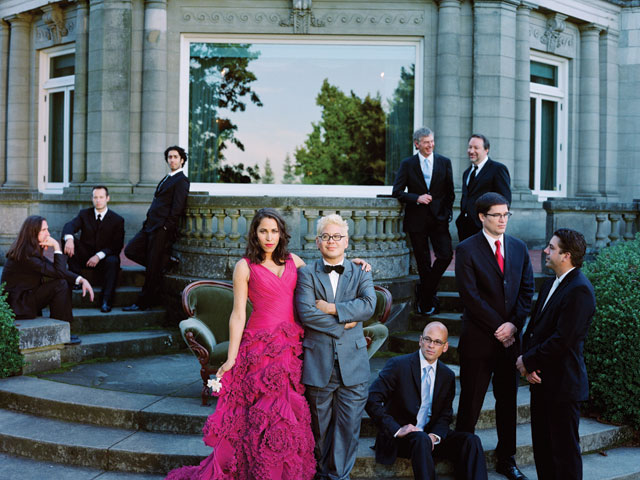 Have you already started to work on Pink Martini's next album?

Thomas and I haven't really had a chance to talk about that since we've been in a bit of a whirlwind frenzy getting ready for the New Year's Eve shows. But ever since I could sing again, I've written a ton of songs. I have to sing it—hear it—in order to really write. Through my silence over the summer, I had all these ideas that finally came roaring out when I could sing again. I'll eventually play everything for Thomas and see what he thinks.

And perhaps someday you could release another solo project, because '78 is such a timeless record.

Thanks! I've written enough material for another solo album, a children's album, and several more. I love '78 and wish I'd had more time to promote it. But even though it's been a few years, I hope people still have a chance to discover it. I really love those songs.

You're headed to L.A. in the next day or so. Do you ever get a chance to shop when you're in town?

When I can! My sister lives in Santa Monica, so whenever I visit, I sort of hunker down at her place. But this time I'm already planning to visit Noodle Stories on 3rd St.

You've played some of the biggest venues in Los Angeles. What do you most appreciate about places like the Hollywood Bowl and Walt Disney Concert Hall?

I feel so lucky to be able to play in those beautiful venues. First of all, they're both so iconic. The Hollywood Bowl looks so art deco and old Hollywood. It's inherently glamorous. And Disney Hall, given that it was designed by Frank Gehry, is one of the most amazing buildings in the world.

Would you mind giving us a preview of the New Year's Eve shows?

It'll be really fun and festive because I'm going to be totally giddy to be back on stage. Plus Ari Shapiro will be there, so we'll have all of that wonderful Ari-ness and a bunch of other fantastic guests such Ida Rae Cahana—who's a cantor as well as my neighbor, and sings with us on "Elohai, N'tzor."

We'll also have Kim Hastreiter from Paper Magazine, New York-based puppeteer Basil Twist, Patricia Costa Kim on accordion, and our Portland string players, the Harvey Rosencrantz Orchestra. It's going to be great. And my eight and 10-year-old nieces will be making their world debut singing with me! I can't wait!