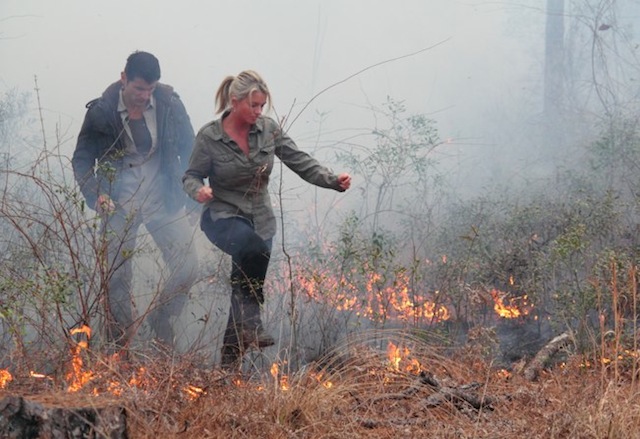 Substitute snow for the fire and you'll have a good idea of what tonight's new episode of "Man, Woman, Wild" (Discovery) will be like.

Good news tonight is that we've got some new episodes of Greg Fitzsimmons "Pumped," some shows on Discovery, a series premiere on Syfy, and a new episode of "Chelsea Lately" for late night. Thank you TV gods for answering our prayers during this desolate week.
—-
Yesterday Mitt Romney vowed to pull the plug on PBS if elected, not that he wants to "kill Big Bird," but he's demanding that "Sesame Street" be broken up by commercials, effectively undermining the educational benefits of advertising-free programming.
—-
Some analysis of/bitching about the Golden Globe TV nominations:

Best Television Series - Drama: Of course "American Horror Story" (FX) made it because of the extreme kinkiness but I wonder why the last few seasons of kinkiness on "True Blood" has been ignored by the HPFA. The "Boss" nomination is a mystery - an interesting show, no doubt, but "best" of all dramas in 2011?

Best Performance by an Actress In A Television Series - Drama: What have I been missing about Julianna Margulies' performances in "The Good Wife" (CBS) that makes me question her nominations in every award show? I think she's a great actress but there are a lot of other options on TV. Unfortunately I don't agree with these options: Madeleine Stowe from "Revenge," and Callie Thorne of "Necessary Roughness." I would have liked to have seen Thorne nominated for her work on "Homicide" and "Rescue Me" before getting one for this series. If she wins, I will still be happy for her.

Best Performance by an Actor In A Television Series - Drama: Please just send the award to Bryan Cranston now and get it over with - the man has been amazing. The nomination for Jeremy Irons ("The Borgias") is simply Europeans wanting one of their own on the podium.

Best Television Series - Comedy Or Musical: Laura Dern is awesome but "Enlightened" is not a comedy. Objective "Glee" fans would readily admit that this was not their best season, so why the nom? "New Girl" isn't a bad show but it's not among the top 5 best shows in anyone's book, unless you're from Croatia or somewhere like that. I was really pleased to see "Episodes" (Showtime) on the list but it only made it on there because of its affiliation with a UK producer - again the Euros are looking out for themselves. Where the hell is "Louie"? No excuse for that omission.

Best Performance by an Actress In A Television Series - Comedy Or Musical: There were so many great performances by females in comedy this last year, it's criminal to see them ignored in this list. Once again, neither "Enlightened" nor "The Big C" are comedies. They have comedic moments and I worship both Laura Linney and Laura Dern but they are not comedic actresses acting in comedies. I would not have considered Zooey Deschanel in the list of top 5 comedic actresses in 2011.

Best Performance by an Actor In A Television Series - Comedy Or Musical: Overall the HFPA made some good choices in this category but the most immediate adjustment would be to substitute Louis C.K. for Johnny Galecki, for chrissakes.

Best Mini-Series Or Motion Picture Made for Television: Of course the UK's "Downton Abbey (Masterpiece)" (PBS) is going to win, the rest on the list are just filler.

Best Performance by an Actress in a Supporting Role in a Series, Mini-Series or Motion Picture Made for Television: I'm pretty sure that Maggie Smith of "Downton Abbey (Masterpiece)" (PBS) is going to get this but the Euros love old Hollywood and they might throw the very capable Jessica Lange a bone for her daring work on "American Horror Story."

Best Performance by an Actor in a Supporting Role in a Series, Mini-Series or Motion Picture Made for Television: There should have been actors from more comedies and less actors from mini-series in this group but they're all great performers. It would be fantastic to see Eric Stonestreet walk away with a Golden Globe to match his Emmy but this is very much in the air. We'll see what happens in 2 1/2 weeks!
—-
The TV Junkie Must-Watch Plan: "Pumped," "Man, Woman, Wild," "Alaska: The Last Frontier," "Chelsea Lately"

9:00pm Man, Woman, Wild Discovery - Bear's Kitchen Surviving a trek down a mountain covered in ice is only the beginning of the journey.

10:00pm Alaska: The Last Frontier Discovery - Before the Freeze The Kilcher family, who live on a 600-acre homestead in Alaska, braces for another brutal winter.