TV Junkie: Highlights of the Year aka 'There is nothing on TV tonight' 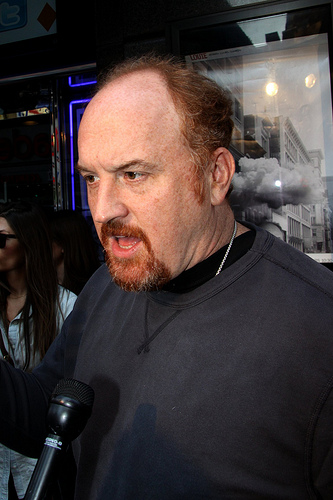 Talking with Louis C.K. on location at "Louie" was one of the highlights of the year for The TV Junkie.
Favorite TV Junkie Stories in 2011

2011 was another great year with unparalleled experiences for the TV Junkie here at LAist. As a writer for LAist I had the opportunity to attend industry conferences like the Television Critics Association, awards shows like the Golden Globes and the Peabody Awards, premieres at the Tribeca Film Festival, and countless interviews with incredibly talented creators and performers. Thank you for being along for the ride and for your support.

I've listed below several of the stories that were most memorable for me as a writer and producer over the past 12 months. It was a privilege to enjoy the access I was provided with and without the bottomless patience of the people who dealt with me in putting these stories together, none of these moments would be possible. Thanks again.

PaleyFest2011 - If you love TV, the annual Paley Center for Media celebration of TV known as PaleyFest is the must-attend event of the year. This year at PaleyFest2011 we talked to the crew from "The Walking Dead" & "True Blood," "Parks and Recreation," Jimmy Fallon and more. Check out 2012's lineup so far and make plans to go.

Bill Burr Tours of... - This year we met up with LA-based comedian and actor Bill Burr (who made semi-regular status on AMC's award-winning "Breaking Bad" this season) to do some more of his hilarious drive-around tours of Los Angeles/Hollywood Hills, New York City, and Boston. YouTube comments suggest that the videos become a TV series, what do you think? As always, go see Bill Burr perform if you get the chance, meanwhile, you should subscribe to his Monday Morning Podcast.

Interviewing Marc Maron - One of the top podcasters in the world, incredible comic and interviewer all in one self-described neurotic package, it was an incredible honor to speak with the man. Of course you should listen to his WTFpod religiously and of course you should check out his new album This Has To Be Funny.

Exclusive Interview on Location with Louis C.K. - I tracked down Louis C.K. on the streets of New York City filming an episode of FX's "Louie" and talked to him about his fantastic show for an LAist exclusive.

An Interview With TV Winkler - A breakfast sit-down and chat with TV icon Henry Winkler about his work on Adult Swim's "Children's Hospital" and more. He was super-friendly yet professional, and as someone who grew up in the 1970s, it was a morning that was completely surreal.

2011 Peabody Awards - A chance to talk to several of this year's winners included Graham Yost, Timothy Olyphant, and Elmore Leonard of "Justified" and Ray Romano, André Braugher, and Scott Bakula from "Men of A Certain Age." Although the #MOACA crew have always been appreciative of getting their show on TNT but I thought it was shameful that the network dumped their Peabody-winning show. I talked with series co-creator Mike Royce a few weeks before TNT announced cancellation of the show.

The Channel Zero Podcast - This podcast about TV, comedy, and entertainment regularly provides me the opportunity share on LAist my interviews amazing comedians and performers such as Maria Bamford, Paul Scheer, Joshua Malina, Nick DiPaolo, Michael Ian Black. If you told me 6 years ago that I'd be speaking with Isabella Rossellini or Tim Conway I would have said you're crazy. Thanks again for all your support.
—-
The TV Junkie Must-Watch Plan: "Felipe Esparza: They're Not Going to Laugh at You," "Private Screenings: Sidney Lumet"

7:00pm Felipe Esparza: They're Not Going to Laugh at You Showtime - The comic's first solo concert since winning television's ``Last Comic Standing'' competition.

7:00pm The In-Laws TCM - (1979) A New York dentist (Alan Arkin) lands in a Central American hot spot with a shady guy who soon will be his daughter's father-in-law (Peter Falk).

9:00pm Private Screenings: Sidney Lumet TCM - The director of Dog Day Afternoon and The Verdict talks about his work.