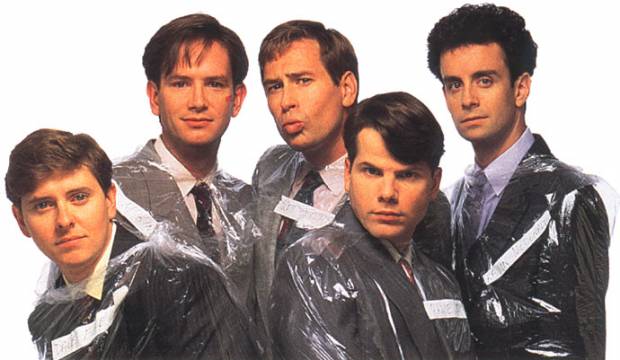 The Kids in the Hall might not have graduated from sketch group to TV and certainly would not have become the international phenomenon they became without Joe Bodolai - one of his many achievements.

It's with considerable sadness that I have to report that prolific comedy writer and producer Joe Bodolai was found dead of apparent suicide in a Los Angeles hotel room yesterday. If you liked early "Saturday Night Live" he was a writer and creator there in the early 1980s; if you liked "The Kids In The Hall" TV show, Bodolai was the man who made that show happen and kept it on the air and even directed and helped write the show; if you liked Mike Meyers' character Wayne of Wayne's World fame, Bodolai helped shaped the character and co-wrote the first draft of the movie script; if you've enjoyed any Canadian comedian in the last 20 years, Bodolai helped set up the TV infrastructure that continues to help launch comics' careers there; if you like Major League Baseball, Bodolai helped expand the appeal of the game by helping establish the Toronto expansion of the sport with the Blue Jays; the list of Bodolai's achievements goes on and on and he only touched on some of them in what was his apparent farewell blog post last Friday.

There are many people in LA right now whom Bodolai gave their first chance at comedy, their first chance at TV, a chance to get their TV series made after he tweaked their scripts or helped produce their pilots, these people who are now successful and the thousands of people whose jobs are tied to supporting these TV shows and performers (People at NBCUniversal, IFC, HBO, and Comedy Central, I'm talking to you) owe a huge debt to Bodolai and in writing this post I'm hoping to create some more awareness and appreciation of this great and very funny man. You can hear a couple of fairly recent podcasts with Bodolai at the end of the post on this page. You can see clips and sketches from TV shows and web shows that Bodolai produced on his YouTube channel, QualityShows. Check them out, the list of performers is astounding.
—-
Funny or Die is a place that hosted some of Joe Bodolai's videos and it's a the real deal, numbers-wise. Funny or Die has made almost $30 million so far this year and it will soon release its first feature film, Funny or Die Presents Tim and Eric's Billion Dollar Movie, and another TV show, "Billy on the Street," in addition to "Jon Benjamin Has a Van." Since the company is still privately held, I'm hopeful that they'll be able to maintain their independence and not be censored by shareholders. I did get to pose a question to company cofounder/investor Will Ferrell about FunnyOrDie.com earlier this year and he was adamant in his support for independent production of comedy, a key tenet of the organization (as it stands now). I like that they're making money, but not too much money, as that would attract the kind of investor that likely might dumb down and milquetoast the whole operation. Congrats on a great year Funny or Die - keep up the good work!
—-
The TV Junkie Must-Watch Plan: "Chuck's Week Off: Mexico," "The Botany of Desire," "Daleks: Invasion Earth 2150 A.D."

8:00pm Wild! KCET - Rhinos Charging Back Footage of the African rhino includes clashes between elephant and rhino and rhino birth.

10:15pm Daleks: Invasion Earth 2150 A.D. TCM - Dr. Who (Peter Cushing), his granddaughter, his niece and a London bobby (Bernard Cribbins) go forth and find aliens out to core Earth.