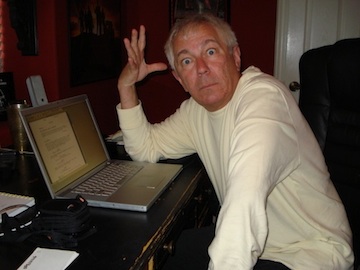 Joe Bodolai (Photo via @joebodolai on Twitter)
Joe Bodolai, a former writer for NBC's "Saturday Night Live," was found dead in a hotel room in Hollywood. TMZ reports that "cops recovered a bottle of antifreeze and Gatorade in the hotel room ... and it's likely his death was due to consumption of the toxic chemical."

Bodolai, 63, wrote for the ''SNL'' in the early 80s and co-wrote the first draft of the film "Wayne's World," notes City News Service.

The scribe had taken to social media and his blog in recent days to suggest he was going to bring his life to an end. "IF THIS WERE Y0UR LAST DAY ALIVE WHAT WOULD YOU DO?" is the title of a blog post from December 23, which lists "Stuff I Would Like to Have Seen In My Life" and "Things I Regret" among other items. His Tweeted link to the blog merely said "Goodbye."

"I don’t need replies or comments or anything. I need to feel the good that I did and whatever good I have ever done for you is enough for me. May you all have the happy lives you deserve. Thank you all for being in my life," he concludes.

"Los Angeles County coroner's Lt. Larry Dietz said the death was reported as a suicide, but he had no further details on the circumstances. An autopsy is pending," reports L.A. Now.