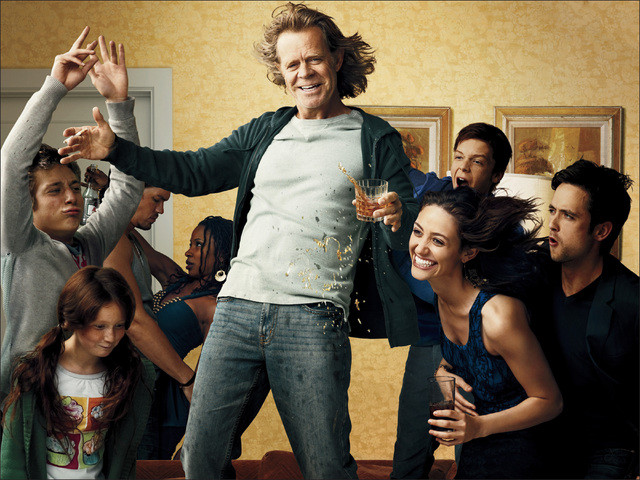 This is a terrible week for TV as we have almost nothing but reruns - thank you Travel Channel for giving us another episode of "The Layover" tonight!
—-
Alan Taylor has directed some of the best episodes of some of the best new shows on TV including "Game of Thrones," "Nurse Jackie," and "Boardwalk Empire" and he's just been picked to take over direction of Thor 2 which will be released in late 2013. Congratulations Alan!
—-
Last week I posted my Top Ten TV Dramas of 2011 and my Top Ten TV Comedies of 2011. Below are a few that I wanted to mention as well as some reader submissions that I received here and via my Twitter handle @TheTVJunkie. Thank you!

"Shameless" (Showtime) - I got messages and Tweets about this show and complaints that I hadn't included it in my Top Ten. I love this show but competition was fierce this year and where do you fit in an hour-long show that is definitely more comedy than drama? Everybody in this show has shown incredible commitment to their characters and a demanding storyline. William H. Macy, Emmy Rossum, and Joan Cusack are great actors and great sports to have joined this project, but everyone is so strong on this show I feel bad name-checking just them. The kids on the show, the kids! So freaking good. Also, the show's pacing and editing make the hour go by way too fast. Can't wait for the season debut in January. Damn, now I want to go back and adjust the list from last week - too late!

"After Lately" (E!) - I like this show a lot mainly because I like the supportive comedic environment that has been established at "Chelsea Lately." Chelsea Handler has rounded up some of the best talent to work for her and they've proved that they can do more than just her late show. At this point "After Lately" can't exist without "Chelsea Lately," something that I think is required for it to make it on my Top Ten but the show is so much fun, so full of real and hilarious discomfort and realistic call-backs to the talk show that it's a favorite of mine despite the umbilical cord. A reminder that there will be a new episode on at 11pm on New Year's Day, please check it out.

"Hell On Wheels" (AMC) - There are a lot of "Deadwood" purists that don't think another TV Western should be given a chance but don't count me among them. This is a good show that could have several great seasons in it depending upon how well they manage to tie in real-world history to the already very real social drama that they've established in this first season. AMC has again shown that it is not committed to any specific show formula.

"Enlightened" (HBO) - This is a show that has more moments of painful, non-funny discomfort than knee-slapping guffaws so it really shouldn't be classified as a comedy. As I wrote in earlier posts, Laura Dern is absolutely fantastic and holds back nothing in her television debut. I hope she can hold onto whatever she's doing and doesn't listen to anyone about how she "should" act for TV. Mike White has never been classifiable and together with Dern they have created more poignant moments in a small set of 1/2 hours than many series have done over several seasons. This doesn't mean that keeping "Enlightened" should have been an either/or decision vs "Bored To Death" for HBO, there was room for both on their schedule.

"Treme" (HBO) - "Treme" won't let the us forget about New Orleans and it's an important series for that alone. Add the incredible music, the political and dramatic story lines and you've got a great show.

"Archer" (FX) & "Bob's Burgers" (Fox) - I'm not the biggest fan of animated series but "Archer" is an exception. Its over-the-top humor and great voice cast headed by H. Jon Benjamin put it head-and-shoulders above all other series other than Fox's "Bob's Burgers" which also features Benjamin, but this time adeptly voicing a show that really is about family with only a little bit of potty humor.

"Wilfred" (FX) - This Australian import was already a great show (as evidenced in the reruns broadcast on IFC) but who can ignore the abilities of Elijah Wood? It's a bit of a silly show but there is something comforting about the "lesson" format although I don't know what the "let's get stoned at the end of every episode" message is.

"Episodes" (Showtime) - Here's an idea: Why don't we allow Matt LeBlanc to actually be funny? "Episodes" provided a great venue for this question to be answered and, as a guy who knows only a little bit about the TV business, this exploded view of the show-making/unmaking process was hilarious as well as being informative.

"Happy Endings" (ABC) - Of all the "group of friends" shows that debuted in the last year, this was the survivor and that's because it's funny and every character gets almost equal footing in every episode, even the gay guy who isn't portrayed as a parodied stereotype for a change. Also, I love Casey Wilson.

"The Good Wife" (ABC ) - I got a few Tweets to include "The Good Wife" on this list and even though I don't quite agree, I am your slave. This show won a Peabody Award for its first season which did tap into the politics and gender roles with considerable savvy. Unfortunately the show seems to have devolved into yet another nighttime soap opera - the writers and cast are better than that, I hope the show gets on track.

"Boss" (Starz) - I also got some Tweets to include this show which I'm a little ambivalent about. I think it's great that Kelsey Grammer is busting out of the box he's been put in for the better part of 20 years but sometimes this show felt like it was trying too hard to out-FX FX and out-HBO HBO in terms of extremes of plot swings, violence, and nudity. Also, where the hell is Starz anyways? This network needs to figure out how to get into one of those HBO/Showtime bundles offered by cable providers as it still seems a bit too expensive to pay for yet another premium add-on for most cable subscribers.
—-
The TV Junkie Must-Watch Plan: "The Layover," "Rock Center With Brian Williams"

9:00pm The Layover Travel - Montreal Tony calls up a friend and visits the hot spots that can't be found in a guidebook.