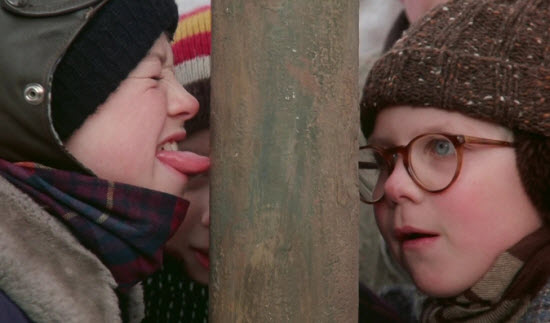 We triple dog dare you to try to find something to watch this weekend! We've got podcasts and other choices below to entertain you.

Of course you could always turn on TBS's Christmas Story marathon [see above] tomorrow and you might have to because there aren't a lot of options until late in the afternoon and evening [see below]. If you are staying up late wrapping presents like me, you will want to turn on TCM for the classic film, The Bishop's Wife, and fix a martini while Cary Grant not-so-platonically woos Loretta Young. Saturday will feature a "Doctor Who" that highlights past Christmas episodes while Sunday an entirely new Christmas special "Doctor Who" airs on BBC America.
—-
Please please please review our Top Ten TV Dramas and Top Ten TV Comedies of 2011 lists and contribute your own favorites for our Reader's Choice post next week!! Put your suggestions here or in the Comments of each respective post.
—-
Please follow LAist and the TV Junkie on Twitter. If you're looking for stuff to listen to while you wrap, please consider subscribing to our Channel Zero podcast and downloading a few episodes. Also check out our suggested podcast episodes of the week in this post.
—-
Happy Holidays to you - thank you for reading the TV Junkie this year!
—-
The TV Junkie Must-Watch Plan: Tonight - "Chuck," "The Life & Times of Tim," "Fashion Police," "Late Show With David Letterman," "Late Night With Jimmy Fallon." Saturday - Miracle on 34th Street, "Doctor Who," "The Graham Norton Show." Sunday -

9:00pm Murder, My Sweet TCM - (1944) The search for a missing person plunges detective Philip Marlowe into a deadly web of blackmail and murder.

9:00pm Doctor Who BBC America - The Doctor, the Widow and the Wardrobe After being evacuated to an old house in Dorset, a woman and her children encounter The Doctor.