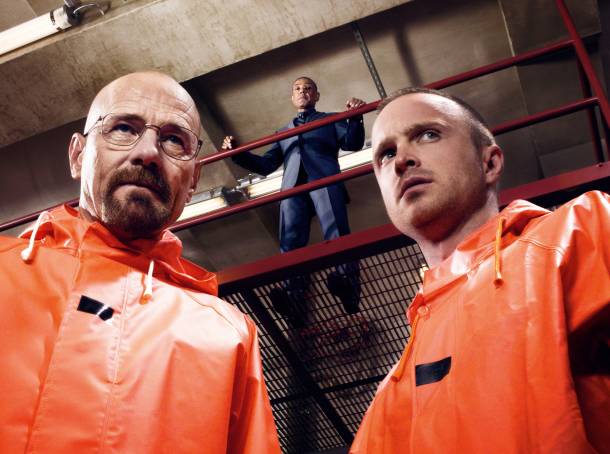 AMC's "Breaking Bad" is one of our Top Ten TV Dramas of 2011 - check out our list and voice your opinion!

America was incredibly spoiled last night with hilarious appearances by Marc Maron on "Conan" and Louis C.K. on "Late Night With Jimmy Fallon." Tonight the must-watch show is "The League" which will give us 2 episodes to end their incredible seasons. There's a lot of reasons why this show made my Top Ten TV Comedies of 2011 list, watch it tonight to get more of them.
—-
Was really pleased to read this morning that Michael Showalter has sold a 1/2-hour comedy script to Fox titled "I Hate Your Friends." Let's hope this show makes it beyond the script-phase. Also, to remind you, Michael Showalter will be part of SF Sketchfest's Wet Hot American Summer: The Live Radio Play on January 21st, along with David Wain, Michael Ian Black, Joe Lo Truglio, Ken Marino, Christopher Meloni, Marguerite Moreau, Amy Poehler, Paul Rudd, and Molly Shannon. SF Sketchfest looks particularly awesome this year, a huge number of events with a huge list of comedy names and it's just a short jaunt up the coast. Please consider going.
—-
Yesterday I posted my Top Ten TV Comedies of 2011 list (please check it out) and continue today with the Top Ten TV Dramas of 2011 list, again, in no particular order but grouped by network:

1. "Breaking Bad" (AMC) - Because of the way AMC had scheduled the show it could not be submitted to the various awards committees in 2011 where it undoubtedly would have scored more than a few statuettes. Creator Vince Gilligan manages to push this show to unparalleled heights from episode to episode, powered by an ensemble that is criminally ignored by the Screen Actors Guild. Yes, series lead Bryan Cranston deserves as many accolades as possible but he's not in every scene of this show. Kudos to Gilligan for being brave enough to put some comedians on the show as cast members, including Bill Burr and Lavell Crawford.

2. "The Killing" (AMC) - This excellent show was overshadowed by a bunch of whiner critics who complained that the killer wasn't revealed at the end of the season. Did that happen on "Twin Peaks"? "Dallas"? Any serialized drama? Methodical character development and mature pacing made "The Killing" a pleasure to watch. Congrats to Mireille Enos on her Golden Globe nomination - season two should be a doozy.

4. "Game of Thrones" (HBO) - HBO stuck its neck out to out-fantasy its other fantasy series, "True Blood." While I was annoyed by the seemingly-required 2.5 nude scenes per episode, great acting and plot twists were more than engaging. The overwhelming feeling of doom as "Winter is Coming" is compelling enough to tune in for season two.

5. "Boardwalk Empire" (HBO) - Steve Buscemi has been fantastic from the first scene of this show and the head of steam he gathered by the end of this season was impressive and makes me wish he got another Golden Globe nomination for his work. The showrunners have also been fearless in hacking away at their ensemble and were more than busy in the last couple episodes to set us up for a new set of characters for season three.

6. "Homeland" (Showtime) - While I've alway felt that Claire Danes' Carrie was too nuts to make it into a CIA facility as a visitor, much less an analyst, she's impossible not to watch in this suspenseful series and is bolstered by what should be Emmy-nominated performances by Mandy Patinkin and Damian Lewis whose characters keep each scene with Carrie on task and moving forward. A great show with very realistic action and consequences.

7. "Justified" (FX) - This show was in danger of becoming a procedural joke halfway into its first season but shied away just in time to become a dependably fearless show. I only wish they had bourbon featured more prominently. If you're a "Justified" fan you'll want to head over to the Paley Center on January 17th to see Timothy Olyphant, Graham Yost, and Elmore Leonard speak about the new season that premieres that night.

8. "Sons of Anarchy" (FX) - Here is another action show that has consistently blown away everything on broadcast TV. This season included some major changes and challenges to the core set of characters and while the season finale was less thematic than past season finales, it set up plot points we'll be thinking about over the next few months as we eagerly await season five.

9. "Southland" (TNT) - "Southland" is the most realistic police drama on TV. It puts the camera in the squad car, on the street, dealing with the daily dangers (and absurdity) that police face every day. While the show also addresses season-long themes and character development, it does so without making a soap opera of those moments. That being said, Michael Cudlitz has been stand-out amazing on this show and we can't wait to see him do his stuff.

10. "Men of a Certain Age" (TNT) - Within a month of receiving a highly respected Peabody Award, this excellent show was canceled by TNT after two years of shuttling it around from place to place on its schedule, undermining the show's chance to build a significant audience from the first episode. That being said, it's a miracle that we got what we got: a funny and poignant show about real people being faced with the very real challenges of: career changes, failed marriages and romance, kids, and personal aspirations and shortcomings. Powered by the remarkable trio of Ray Romano, Scott Bakula and Andre Braugher, the show was a perfect balance of realistic humor and realistic drama - people don't laugh their way through every day and they don't rage through their days either, at least, if they're not in an institution. We need more shows like this one and I hope that what happened with TNT doesn't sour the creative forces behind "Men" from embarking on a similar effort.
—-
If you haven't seen the Funny or Die "Drunk History Christmas" with Ryan Gosling, Jim Carrey and Eva Mendes I've embedded it at the end of this post.
—-
The TV Junkie Must-Watch Plan: "Speed," The Thin Man, Shadow of the Thin Man, "The League," "The League," "Late Show With David Letterman," "Late Night With Jimmy Fallon"

10:30pm The League FX - Season Finale Part 2. The Funeral The race is on for the Shiva and the Sacko; Taco teams up with Matt Forte; one of the guys is unable to manage his own team for the big game.