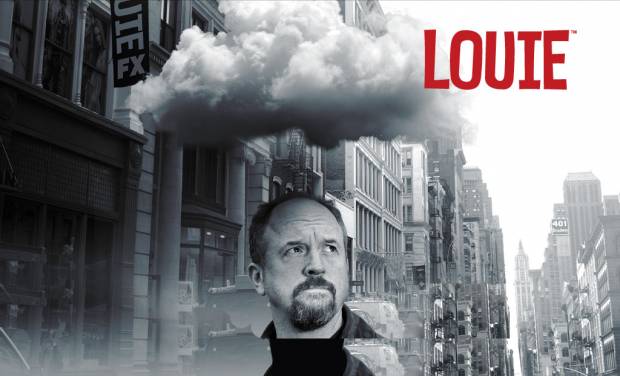 Don't forget to check out tonight's season finale of "American Horror Story" (FX @ 10pm), titled "Afterbirth," it's here just in time for Christmas. Preceding #AHSfx, I suggest you check out Ball of Fire on TCM, with Gary Cooper in the geekiest role of his career and Barbara Stanwyck in one of her sexiest. We are truly blessed in late night TV tonight with Marc Maron on "Conan" and Louis C.K. on "Late Night With Jimmy Fallon."
—-
The Top Ten Comedies of 2011: Yes, it's that time of year and this will be the first of several lists over the next week. Those "awarded" below do not appear in any particular order except for the fact that those listed earlier may have leapt to mind more readily than the others and/or are grouped by network:

1. "Louie" (FX) - Sometimes dark and not knee-slappin' funny but that's the way life is for Louis C.K.'s character. Beautifully shot, brave subject matter and criminally ignored by the various awards committees, hands down the best comedy on TV the last 2 years.

2. "The League" (FX) - Likewise ignored by 'the Academy' and by most of my fellow critics (shamefully!), this incredible show relies upon the enormous improv talents of its ensemble composed of Paul Scheer, Nick Kroll, Steve Rannazzisi, Mark Duplass, Jonathan Lajoie, and Katie Aselton, to push the limits of basic cable the way "It's Always Sunny In Philadelphia" used to. Jeff Goldblum and Sarah Silverman should get Emmy noms for their guest starring appearances in the Thanksgiving episode.

3. "It's Always Sunny In Philadelphia" (FX) - Series co-creator Rob McElhenney led the now very familiar "Gang" of Paddy's Irish Pub into new and even more absurd exploits this season while deliberately gaining 40+ pounds for his role as Mac. It was fun but I very much miss Margaret McPoyle.

4. "30 Rock" (NBC) - Perennially frenetic, this is probably the best-produced sitcom on broadcast TV. "30 Rock" is self-reflexive parody of broadcast TV, celebrity, and big business and it is rarely off the mark.

5. "Parks and Recreation" (NBC) - 'Parks&Rec' is not "30 Rock"-lite and never will be. While the most recent season featured Leslie and Ben's romance, every character was developed and strengthened and had moments to shine in. Even handed writing and inspired performances make this show a keeper.

6. "Community" (NBC) - NBC has somehow boxed in series creator Dan Harmon enough to be able to air his show at 8pm while letting him get away with some pretty crazy stuff. We're trusting that NBC will honor its promise to bring this great ensemble and creative team back next year.

7. "Bored To Death" (HBO) - It was too good to be true, to have a comedy that made references to classic literature and marijuana in the same sentence. Not only expertly and tenderly written by Jonathan Ames, the show put together the best comedy trio that the world has seen in 50 years: Ted Danson, Zach Galifianakis, and Jason Schwartzman - they were all willing to "go there" for whatever the script or their characters called for. They will be sorely missed - cutting this show was one of HBO's few mistakes of the past several years.

8. "Curb Your Enthusiasm" (HBO) - Thank you Larry David for coming back to us with another collection of absurd yet completely understandable stories of frustration and embarrassment, please come back again soon.

9. "Raising Hope" (Fox) - Greg Garcia created this amazing show that should speak to us since our economy has been in the tank for so long. Lucas Neff, Martha Plimpton and Garret Dillahunt form the basis for a family that has been financially struggling since forever and this show somehow always makes fun of them without insulting them (or others) for being pretty deep in the 99%. Fox did a great thing by picking up this show and I hope they continue to support it.

10. "Modern Family" (ABC) - Show creator Steve Levitan knows he's riding on the crest of a wave that can crash at any time. The show is a critical and popular darling and while it had a (very few) handful of off moments this season, these were more than made up for by some great performances and situations. The strength of this team makes me appeal again to the TV Academy for an ensemble category.
—-
The TV Junkie Must-Watch Plan: Ball of Fire, "American Horror Story," "Conan," "Late Night With Jimmy Fallon"