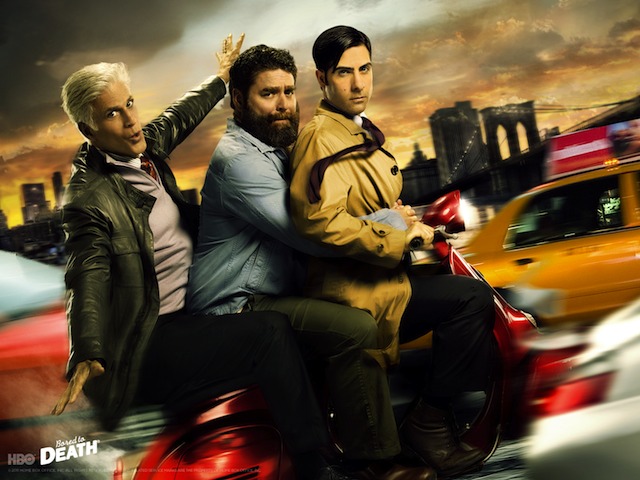 HBO has canceled "Bored To Death" - if the network could have afforded one indulgence, it should have been this show.

Got some very sad news this morning that HBO is canceling "Bored To Death" and "Hung" along with "How To Make It In America." I was never a fan of "How To Make It In America" as it always seemed like a fashion world-version of "Entourage" but there were good people working on that show. "Hung" and "Bored To Death," however, were innovative and fearless shows that were impossible to duplicate. "Bored To Death," in particular, was a perfect combination of art, comedy, and broadcast entertainment that should have been much more popular than it was. I knew something was up with the show when HBO didn't have a premiere event for it this season and they moved it around on their schedule.

The series, created and run by writer Jonathan Ames, won an Emmy Award in 2010 for comic artist Dean Haspiel's opening titles. I've always felt that the series deserved a Screen Actors Guild nomination for best ensemble as the trio of Ted Danson, Jason Schwartzman, and Zach Galifianakis, is the best comedy team to have graced TV screens in a decade. "Bored To Death" always performed well when paired with "Curb Your Enthusiasm," with a 92+% retention rate but that pairing didn't happen this year, and it's no surprise the show's audience dropped precipitously.

HBO has renewed Laura Dern's "Enlightened," a show I have been very supportive of but has many counterparts out there, including Showtime's "Nurse Jackie" and "Weeds" just to name a couple. I love Laura Dern on TV and can't wait to have her back - I only wish that "Bored To Death" was returning with her. Since Jonathan Ames successfully ran a TV show for 3 years, I hope to see him and his crew of writers and creators return to TV again very soon.
—-
On an (incredibly) positive note, it was announced yesterday that Louis C.K. will be hosting the 68th Annual Radio & Television Congressional Correspondents Dinner on June 8, 2012. No word on if President Obama will be attending this year as the President hasn't attended the dinner since 2009. I immediately wondered if C.K. will say the n-word because it appears that he is the only white man that can get away with saying it.
—-
Since I highlighted Shout Factory's release of season one of "The Adventures of Tintin," the animated series that appeared on HBO 16 years ago, I thought I'd let you know that the 3-D animated film by Stephen Spielberg, The Adventures of Tintin, is also a lot of fun and definitely worth seeing. Only the most-inflexible hardcore Tintin fans would have a problem with this adaptation of the beloved character and his adventures. Yes, some adjustments to the stories have been made to fit into a feature format and yes, there are some unnecessary shenanigans to exploit the 3-D, but otherwise, this is a great movie to see for anyone, Tintin newbie or no. While Tintin has been made more "realistic," he's not too realistic and he's not freakishly realistic as characters were for The Polar Express. Definitely see the film in 3-D - it's worth it, with excellent subtlety in certain desert scenes. Also, please pay attention to the opening credits in which the original drawings by Hergé have been beautifully brought to life - somebody in some studio somewhere, please animate all the books this way! The Adventures of Tintin is appropriate for all ages, excepting the smallest children, I'd say 6 and under.
—-
New TV worthy of your time is getting more sparse starting tonight so here are some entertaining podcasts worthy of your attention:
Marc Maron on KCRW's The Treatment with Elvis Mitchell
Josh Wolf of "Chelsea Lately" on Episode #50 of Fixing Joe with Joe Matarese
The Christmas Edition of The Long Shot Podcast
—-
Today's probably the last day to act on items listed in the TV Junkie audio and video gift guides.
—-
The TV Junkie Must-Watch Plan: "Dirty Jobs," "Chopped," "Chelsea Lately," "Conan" (2nd half), "Late Night With Jimmy Fallon"

9:00pm Dirty Jobs Discovery - Fossil Hunter Mike travels to a remote area near Moab, Utah to try his hand at being a paleontologist.

9:00pm Mysteries at the Museum Travel - Flying Car; Prison Riot; Dreamland Fire Don looks at a car that can fly; a circular saw that was used in a prison riot; the fire that destroyed Coney Island's amusement park.

10:00pm Chopped Food - The Big Scoop Four mystery ingredients in the appetizer basket; one competitor loses count; rabbit in the entree round.