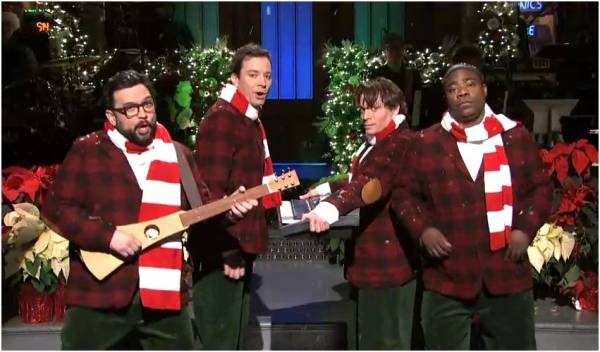 Horatio Sanz joined host Jimmy Fallon, Chris Kattan, and Tracy Morgan on "Saturday Night Live" this weekend for one of the best episodes in ages.

I haven't seen many (any?) of my fellow TV critics writing about the new NFL deal that was made between the league and NBC, Fox, and CBS but it has huge implications for scripted television on the broadcast networks. While some have said that the broadcast networks would have been fatally hit if a web company like Google had acquired the rights to some NFL games, scripted TV on the broadcast networks may be taking a fatal hit with the deal that was made. Football games take up large blocks of time on TV that would otherwise be filled with scripted programming and news magazines. When you see multiyear deals like the one that was just struck, it's obvious that the networks are making a decade-long investment in football and the huge apparatus required to cover and monetize the games with scripted TV losing out in the equation. Thankfully we have cable, and increasingly, the Internet, as alternative mediums for creative productions but the big bucks are going to football.
—-
This Saturday you had the chance to see one of the best episodes of "Saturday Night Live" in quite some time as Jimmy Fallon hosted a very funny, yet very nostalgic edition of the show that put him on the map. Just some of the surprise guests included Rachel Dratch, Chris Kattan, Horatio Sanz, Tracy Morgan, Tina Fey, and Amy Poehler. Fallon reached 35 years into the past by appearing in John Belushi's "bee" costume during the farewell segment at the end of the show. Perhaps the most memorable sketch of the evening was the Tim Tebow spoof, perfectly timed for yesterday's bizarre football game. I would hope that Lorne Michaels would continue to take advantage of Fallon's dedication to put on the best possible show, devoting huge amounts of his personal time as well as staff from "Late Night With Jimmy Fallon" to the production. Jimmy, please host "SNL" again. [Full episode of "SNL" is that the end of this post]
—-
Sunday night had the "shocking" finales of Showtime's "Dexter" and "Homeland." I'm not sure the "Dexter" finale could make up for a season that seemed to have several missteps but however disappointed "Dexter" fans might be, it still must be recognized as one of the best shows on TV, certainly better than anything on the broadcast networks. "Homeland" had an extended finale which was very good but where are the critics who complained so bitterly about AMC's "The Killing" finale who should be just as unsatisfied about Carrie not getting Brody arrested. In fact, in the final scene, [no spoiler] it appears we've returned to square one or even earlier than square one.

Late night Sunday gave us another episode of E!'s comedy gem, "After Lately." Series regular Jeff "Jiffy" Wild laughed on Twitter when we said that he was something of a lead character this season. The fact is that he's the one rational character in the show trying to navigate his way through a high-stakes environment while avoiding the landmines/personality quirks of his regularly outrageous workmates and boss. Even though he might own a pair of hideous golf pants, Jiffy's the guy the audience can identify with. It's a fun show and last night was no exception. If you're going to be up late wrapping presents on Christmas Eve, as I know I will be, then you can catch up with the series as E! will run all the episodes from this season from Midnight to 2am.
—-
The TV Junkie Must-Watch Plan: "Adventure Time," "The Layover," "Rock Center With Brian Williams," "Chelsea Lately," "The Tonight Show With Jay Leno," "Late Night With Jimmy Fallon"

9:00pm Fear Factor NBC - Tall Crappaccino Couples face stunts that include being catapulted off a building towards a cargo net and transferring snakes off their partners with their mouths.

9:00pm The Layover Travel - Hong Kong Tony finds himself in the fascinating city of Hong Kong, in the middle of summer.