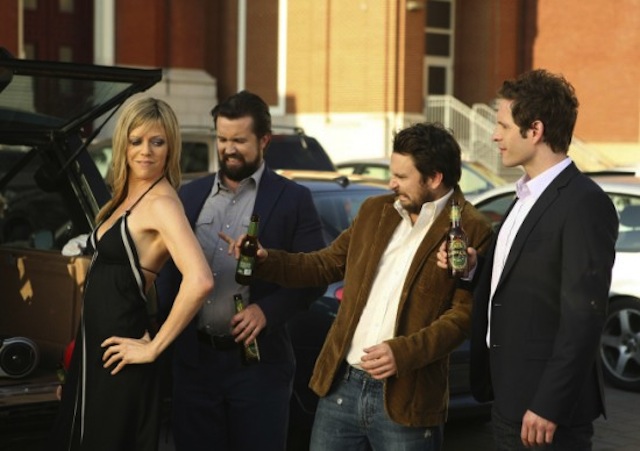 Part 2 of the "It's Always Sunny In Philadelphia" high school reunion airs tonight at 10pm and it's the season finale to boot.

The Golden Globes nominations were announced this morning - we'll explore the TV categories in tomorrow's post.
—-
As you can see from the listings below, not much going on in early primetime unless you like game shows and "reality" TV. You will have to check out the season finale of "It's Always Sunny In Philadelphia" and another new episode of "The League" (FX at 10 & 10:30pm respectively). "Chelsea Lately" had Charlize Theron as a guest last night, which was fantastic, and to follow that up she has Kenneth Branagh tonight - their booker is on fire. The bonus tonight is that Sarah Colonna on the roundtable. Rounding out the night is celebrated author and very funny man, John Hodgman, on "The Late Late Show With Craig Ferguson." Also wanted to mention that "The Soup" (which was excellent last night) now has an online resource for supplemental videos and other tomfoolery.
—-
The TV Junkie (Comedy-Heavy) Video Gift Guide: To follow up the very popular TV Junkie Audio Gift Guide and Addendum, the following is a list of suggested videos released in the last year or so for fans of comedy and TV with discerning taste:

Patrice O'Neal Elephant In The Room DVD - This was shot at last year's New York Comedy Festival and released on TV and as DVD in February this year. The best way to see Patrice O'Neal was in a rank and dank comedy club but he knew how to use a bigger stage as you can see in this video. We'll never forget you Patrice!

Louis C.K. Live At The Beacon Theatre Video Download - Louis was on Leno last night (finally a reason to watch Leno!) and doubtless talked about this online-only video release of his performance at this year's New York Comedy Festival. I was thrilled to have spoken to Louis at a "Louie" shooting location this Spring and can't find anything of his that I don't like. I'd also have to recommend his Emmy-nominated TV special, Hilarious, which also came out this year - and because Louis is so prolific you won't have any crossover of material.

Nick Kroll Thank You Very Cool DVD - Yes, "The League" is on tonight and Nick Kroll is a force of evil as the scheming and devious Ruxin and he is a force of nature in what can only loosely be called a comedy special, Thank You Very Cool. Basically this project was a chance for Kroll to do whatever the hell he wanted to and he took advantage of it: sure, there's stand-up, but Kroll also appears in the various personas of Fabrice Fabrice, Bobby Bottleservice, Gil Faizon, and El Chupacabra and throws in some video projects to boot. Kroll is insanely funny and I'm happy that we'll be seeing him on "The League" for at least another season.

Godfrey Black By Accident DVD - Godfrey has been around for a long time so it was a surprise to me that this was his first one-hour special which makes this a must-have. If you're a "Louie" fan, you saw Godfrey on the show this season in the episode where he befriends Louie's niece. I've been very lucky to see Godfrey do an hour and a half set within the tiny confines of the Comedy Cellar in NYC, I know, I'm spoiled, but this show on the much-larger stage of the Gramercy Theatre is damn good. The edited version premiered on Comedy Central in August but this unedited version includes another 30 minutes of material as well as interviews with Godfrey.

T.J. Miller No Real Reason DVD - You've heard Miller's voice on countless commercials and animated movies, he was the guy with the camera in Cloverfield, and he's been popping up on TV all over the place, most recently on "Happy Endings" a couple weeks ago. I saw Miller perform at Montréal's Just For Laughs festival and felt cheated by his short set: he's surrealistic, bizarre, and completely hilarious. This DVD includes outtakes that didn't make it onto Comedy Central's broadcast of the show as well as two short films.

In the previously mentioned category: Season 1 of "The Adventures of Tintin"; The Ernie Kovacs Collection for the true fan of TV history, surrealism, and comedy; The complete series of "Barney Miller" - the cop show that real cops love; Garry Shandling's "The Larry Sanders Show" complete series - there needs to be no explanation for this.

In the pre-order category: Woody Allen's Golden Globe nominated Midnight In Paris - I know it's not TV but it's got stars of TV in it and we'll be seeing all these people at the Golden Globes; Season 1 of David Cross' Increasingly Poor Decisions of Todd Margaret.
—-
The TV Junkie Must-Watch Plan: "It's Always Sunny In Philadelphia," "The League," "Chelsea Lately," "The Colbert Report," "The Late Late Show With Craig Ferguson"

10:00pm It's Always Sunny in Philadelphia FX - Season Finale. The High School Reunion Part 2: The Gang's Revenge The gang hatches a plan to repair their tarnished image in the eyes of their old high school classmates.

10:30pm The League FX - The Guest Bong Pete's new girlfriend wants to help him with his line up; Kevin's past at the DA's office has him running scared; auto-correct gets everybody in trouble.