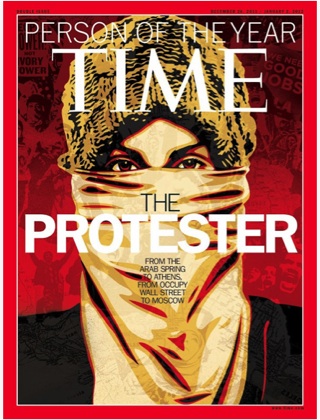 Image via Facebook
More information is becoming available about Sarah Mason, the young woman featured on the cover of TIME magazine as "The Protester."

At 25 years old, Mason's face was captured by L.A. photographer Ted Soqui at Occupy L.A. and turned into one of Shepherd Fairey's iconic images to grace the front of the glossy magazine. Before being snapped by Soqui, though, Mason was apparently already being approached by many a reporter, perhaps because of this (courtesy of NPR):

Cleaning up leaves from the storm the night before is Sarah Mason. The tall, 25-year-old could be a GAP model.

In addition to NPR, Mason was quoted in the LA Times, and now, a long feature about her has run in the Ithaca College magazine 360. In the profile, she details why she's at Occupy L.A.:

“I saw this as a unique opportunity to organize and collaborate with people who had a very broad sense of the activist work that needs to be done. People that recognize that it’s going to take more than nominating a particular candidate, it’s going to take more than just passing a law, it’s actually going to be a long term struggle against a system and an ideology and that’s what inspired me to go and move down to the front lines of Occupy LA,” she said.

But it's possible that this young revolutionary will be a bit polarizing, revealing, as she did, to 360 that part of the debt she's incurred had to do with paying by credit card for things like make-up and clothes:

“I still have debt and I’m not paying it back because I feel like at this point, I have an obligation to try and disrupt and upset the financial industry, the credit industry. This industry is built off of the belief that it is okay to exploit poor people in order to make a profit,” she said. “Just like any other service or product, that you disagree with or have an issue with, you have the right to boycott it or use your power or your capital to speak out or take action against such industries,” she included determinedly...

“Each paycheck that I would get, I would overspend. I got a credit card because I had no money and I needed a credit card to buy things that were essential to my life during this time. I had already spent all this money on clothes, make-up, accessories, and I got the credit card because I needed to my electric bill. Bank of American offered it to me, so I was like, ‘Yeah, of course - I’ll pay my electric bill with it.’ And then of course, it turned into I just started using it recklessly, thinking initially I would be able to pay it back.”

Regardless, Mason's visage has come to represent a global movement. No doubt we'll hear more about her as time goes on.