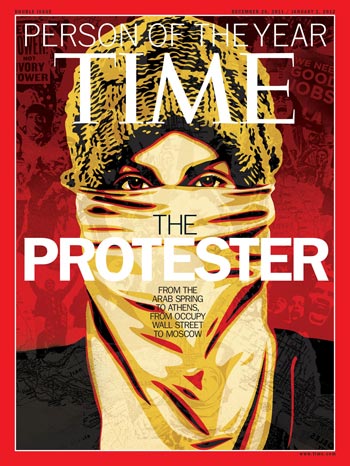 Time magazine cover
When Time declared The Protester its person of the year for 2011, it turned to Occupy Wall Street-supporter Shepard Fairey whose work has that protesty vibe that prospective condo dwellers dig.

Since the image was supposed to represent protesters around the globe, Fairey used a collage of images from Arab Spring, Moscow and Occupy Wall Street. But the main image was shot by local photographer Ted Soqui while he was at an Occupy L.A. protest at the downtown Bank of America. Soqui describes how he got the shot on his blog:


There was a small group of protesters linking arms and making a human chain around several tents near the front of the building. I made a few wide angle photos, then realized a tight shot was going to be way better. There was only one photo where eye contact was made, and that's the shot. The woman in the photo camped out at LA City Hall and was arrested during the LAPD raid and spent time in jail.

Soqui has the original shot here. Soqui told LA Observed that the protester was Sarah Mason, whose bandana was soaked in vinegar "just in case the police sprayed them with gas or pepper spray."

Fairey told Time that he wanted to create an image that "meant business but wasn't scary." That translated into something that Los Angeles Times art critic Christopher Knight just wasn't that into:


The style oozes cozy, collectible nostalgia. On the cover of Time, the schmaltzy result trivializes the portentous power — and authentic potential — of the "Arab spring," Occupy Wall Street and whatever might-or-might-not be breaking now in Russia. Questioning authority never looked more corporate and conventional.