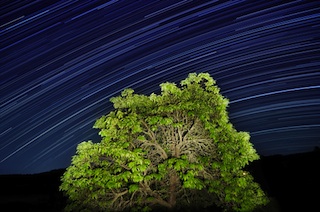 Photo by Vlue via Shutterstock
Last night was prime viewing for the Geminid meteor showers, and one local man managed to get himself injured in a car accident in his pursuit to take in the celestial sight.

While driving along Glendora Mountain Road in the Angeles National Forest, an unidentified man accidentally drove his Mustang off the road, plunging about 100 feet down a hill, according to City News Service. He has gone into the mountains to find a good spot to check out the meteor showers.

"Geminids, which spray out of the constellation Gemini, can appear anywhere in the sky," explains NASA. "Observers with clear skies could see as many as 40 Geminids per hour," was the prediction of Bill Cooke of the NASA Meteoroid Environment Office.

Last night's mountain road sky-gazer was able to walk away from his crash with only minor injuries.

Los Angeles-area meteor watchers may have been able to see the showers from where they live, but some have been opting to travel to get a better look, "People wanting to see the Geminid meteor shower have been flocking to Joshua Tree and the Mojave Desert in recent days. And they say it's been quite a show," notes L.A. Now.

For good measure, L.A. Now also threw in a beautiful time lapse video, except while they say it's from this week, it's actually from last year. Ah, well. It's still pretty awesome, so we'll throw it in again, too.