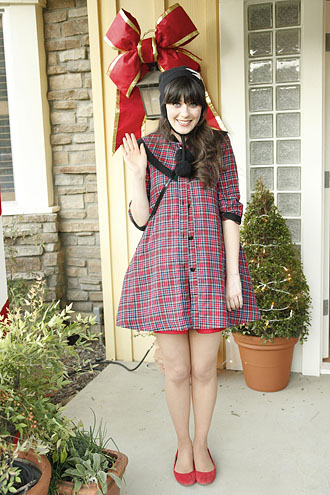 There's a holiday episode of Fox's "New Girl" tonight at 9pm but as holiday episodes air, series will start to go on hiatus. Check out our audio gift guide for ways to keep the funny going over the holidays.
Tonight we've got a great hour of Fox comedy wit "New Girl" and "Raising Hope" but you may have already noticed a lot of shows are going on hiatus as they air their holiday specials which means that we're headed for a few weeks of reruns and B-grade programming. Let's try to head off that downtime with some other media options that are related to TV and/or people we've interviewed over the last year - consider this our "Gift Guide" (audio version):

A Great Stillness - MP3 Album by Eddie Pepitone. We've seen a lot of Eddie this fall, from "Conan" to "Community" and beyond. If you haven't listened to The Long Shot Podcast, of which Pepitone is one fourth, definitely subscribe. But to get the full effect of an Eddie Pepitone "bloodbath," as he calls his shows, get this album. I've been fortunate to see Eddie do a full set and A Great Stillness is an excellent distillation of a night out at a Pepitone show. It's psychological humor mashed through a cheese grater of political wants, professional aspirations, and self-admitted personal shortcomings. Cathartic. [If Eddie ever saw this, he would probably hate seeing this review of his album next to a picture of Zoey Deschanel.]

Dear Mrs. Fitzsimmons - Audiobook by Greg Fitzsimmons. I talked to Greg earlier this year and reviewed the printed version of his book - I can't wait to hear the audio version as he has enlisted the help of friends that include Zach Galifianakis, Adam Carolla, Bob Saget, and Brian Posehn, to tell his story.

Sleepwalk With Me LIVE - Comedy Album by Mike Birbiglia. Mike Birbiglia came to LA to do a great show at USC a couple months ago. If you missed that, shame on you, but you can make up for it by getting this wonderful audio adaptation of his critically-acclaimed NY-staged performance Sleepwalk With Me. As Mike says from the opening segment, he's there to tell you a story, and that's what he does for this hour+ performance. Yes, he goes off on some hilarious tangents but they all come back to a central theme that I won't spoil here. Don't pick away at this, track by track, get the whole album or you'll miss an 11+ minute track in the album only version.

Potty Mouth - Audio CD + DVD by Doug Benson. Doug Benson proves he's capable of dishing our more than just stonerisms in his new comedy album, Potty Mouth. Other than a short, perhaps misguided, foray into Tweet culture, this album moves along quite nicely and it's a great cut of Benson's new material. The huge bonus of this purchase is a DVD containing full, uncensored versions of all six episodes of "The Benson Interruption," one of Comedy Central's braver forays of the past couple years. This DVD might actually be more of a motivator to get this than the audio performance. Whatever interests you, you get them both and I highly recommend this package.

As mentioned in previous TV Junkie columns, Michael Ian Black's Very Famous and Marc Maron's This Has To Be Funny are required stocking stuffers for true fans of comedy this Holiday Season - check them out, they both have sample tracks out there.
—-
The TV Junkie Must-Watch Plan: "Chuck's Week Off: Mexico," "New Girl," "Raising Hope," "Hidden City," "Chelsea Lately," "Late Show With David Letterman," "The Late Late Show With Craig Ferguson"

7:30pm Chuck's Week Off: Mexico Cooking Channel - Oaxaca. Chuck heads to Oaxaca makes "pizza" wows both us and the natives.

9:30pm Raising Hope Fox - It's a Hopeful Life While watching a movie with the family, Jimmy enters a dreamlike state and sees what life would have been like if he had never met Hope's mother (Bijou Phillips).

10:00pm The Conan One Hour Earlier Best of Spectacular TBS - Conan's favorite moments on the show.

10:00pm Chopped Food - Duck for Dinner Duck comfit in the first basket; mystery ingredient in the entree round; dessert round.