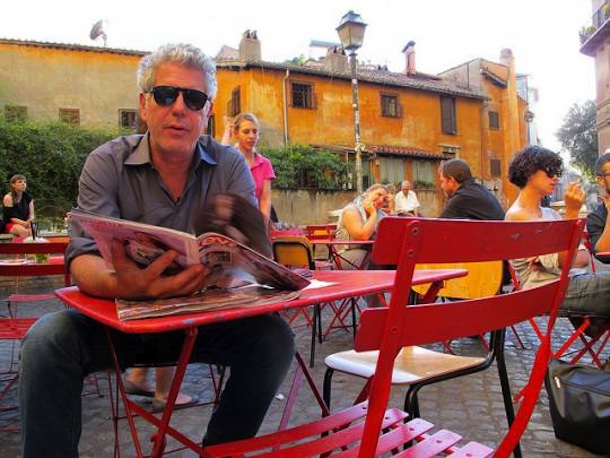 This weekend's "Saturday Night Live" scored its highest ratings in over 5 weeks. Hosted by Katy Perry, with musical guest Robyn, the show had plenty of good sketches, particularly Alec Baldwin's appearance on "Weekend Update" spoofing his removal from an American Airlines flight. This week will feature plenty of build-up towards Jimmy Fallon's stint at hosting on December 17th. I wonder if both "Late Night" and "SNL" writers will be teaming up to make this coming episode potentially one of the best in years. Of course, "Late Night" will be on hiatus this week as Fallon prepares for Saturday's show.

Also this weekend: A very dramatic "Boardwalk Empire" season finale. Not going to spoil it, but this season cleaned out several characters with Sunday's episode containing the most bold elimination of the past 2 seasons. It's a must-watch.
—-
Tonight you get a double dose of Anthony Bourdain with new episodes of both "The Layover" and "No Reservations," the latter is particularly timely as Bourdain explores/explodes the Holiday Season.

Later, be sure to check out "Chelsea Lately" with Margaret Cho guesting as well as "The Colbert Report" which will have Samuel L. Jackson as the interview guest.
—-
Louis C.K. has self-released the special that he filmed at the New York Comedy Festival, and it's available HERE, it's only $5. Today C.K. also did a live chat on Reddit in which he revealed he'd like to do another movie and depending upon how much money this special raises, he would make another online-only release and use the proceeds from that to fund his next movie. Louis C.K.'s appearance at the NY Comedy Fest was one of many incredible performances that week.
—-
This Wednesday, Greg Proops will be doing his free Proopcast, The Smartest Man In The World, at Bar Lubistch, in West Hollywood, at 7pm. Greg Proops, along with almost everybody in the comedy universe, will be at SF Sketchfest (January 19 - February 4), a short jaunt up the coast. Check out the performers list: Greg Proops, Eddie Izzard, Michael Ian Black, Reggie Watts, Marc Maron, Jen Kirkman, plus about 8 million other amazing comedians.
—-
The TV Junkie Must-Watch Plan: Oliver Twist, "The Layover," "Anthony Bourdain: No Reservations," "Chelsea Lately," "The Colbert Report," "The Late Late Show With Craig Ferguson"

8:00pm Fear Factor NBC - Series Relaunch. Scorpion Tales Family duos take part in stunts that include hanging from a speeding helicopter and eating scorpions that they retrieved from the grill of a semi truck.