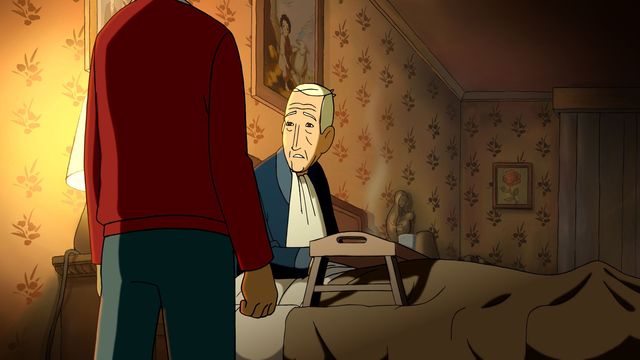 Someone actually acts their age in ARRUGAS. Courtesy Six Sales.

Standing in stark contrast to New Year's Eve and all the recent family film offerings is The Sitter, a gross-out comedy that puts the R in Adventures in Babysitting. Jonah Hill (fun fact: that's a real phone number on the poster) stars as a reluctant sitter saddled with a trio of kiddie terrors. Once upon a time, director David Gordon Green made meditative Southern Gothic dramas like George Washington & Undertow. We're not saying you have to be all serious all the time (we had fun with Pineapple Express & Your Highness), but were Green to put his camera back on the Carolinas, we wouldn't complain.

Animator Ignacio Ferreras (who worked on last year' Oscar nominated The Illusionist) adapts Arrugas (Wrinkles), an acclaimed Spanish graphic novel with cooperation & the full blessing of its artist, Paco Roca. Neither overtly sentimental nor trivial, Roca based his comic on real people & real characters he met in Spanish assisted living homes. In response to what Roca refers to as the elderly's relegation to "supporting roles", the film follows the friendship of two roommates in a care facility, as one begins to show signs of Alzheimer's and the other hatches a plan to trick their caretakers into keeping them together. Arrugas plays for one week only at Laemmle's Fallbrook.