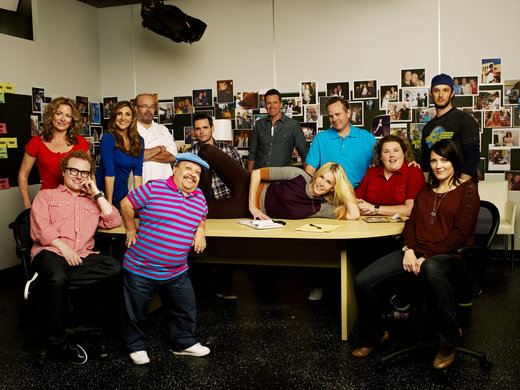 An all new "After Lately" is on this Sunday at 11pm on E!

In a move to keep Sundays as complicated as possible for those of us who like good TV, HBO is premiering the pilot of their horseracing drama series "Luck" with the real debut of the series on January 29. The show is directed by Michael Mann, and produced by "Deadwood" creator David Milch and stars Dustin Hoffman, Nick Nolte, Dennis Farina, Richard Kind, Jill Hennessy and Jason Gedrick. I haven't seen anything more than the trailer and know nothing other than Hoffman's character has spent 3 years in prison due to involvement with something involving horse racing, training, and gambling. With this team of actors and creators, it's the must-watch show of the night and could be part of another cavalcade of Emmys for HBO in 2012.

Other highlights this weekend are "Saturday Night Live" hosted by Katy Perry.... hmmm, but with musical guest, Robyn, who I'm a big fan of. Sunday's packed schedule also includes a very good "Boardwalk Empire" and "Homeland" and thankfully "After Lately" (pictured above) brings on some great comedy to close out the evening, again featuring (new series star?) Jiffy Wild, and a car-cruising wolfpack headed by Brad Wollack and Chris Franjola.
—-
Here's an idea: don't shop at racist Lowe's stores. The retailer has pulled all advertising from Discovery's TLC program "All-American Muslim," after being "alerted" by the Florida Family Association (whatever that is, have you been to Florida?) that the program is part of some sort of Islamist propaganda. I'm not a fan of TLC's programming because they long abandoned the "Learning" part of their original name but from what I've seen of this show, all it does is show that American muslims are just as flawed as "regular" Americans.
—-
The TV Junkie Must-Watch Plan: Tonight - "Chuck," "Onion News Network," "Fashion Police," "Late Late Show With David Letterman," "The Late Late Show With Craig Ferguson" Saturday - "The Graham Norton Show," "Saturday Night Live." Sunday - "Boardwalk Empire," "Luck," "After Lately," "Hell On Wheels" (late rerun), "Dexter" (late rerun), "Homeland" (late rerun)

8:00pm Chuck NBC - Chuck Versus the Hack Off Chuck turns to Verbanski (Carrie-Anne Moss) for help tracking a computer virus; Lester and Jeff's relationship is complicated

10:30pm Fashion Police E! - Joan Rivers rip fashionitas a new one, this week will they talk about Lohan's Playboy cover?

9:00pm Dexter Showtime - Talk to the Hand Dexter works to catch the Doomsday Killers; Debra's battle with LaGuerta boils over.

10:00pm Luck HBO - Series Premeire. Ace Bernstein is released from prison after three years; four racetrack junkies make a bet that could be worth millions.

11:00pm After Lately E! - Finding Jordan Jiffy runs an errand for Chelsea; Brad tries to be nice and take Chelsea's friend out on the town.