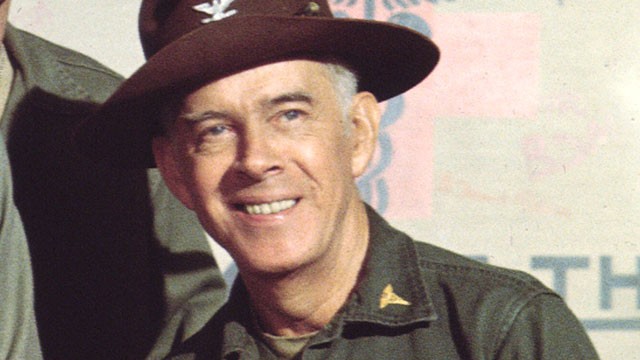 RIP Harry Morgan. The Emmy winning actor best known for his role as Colonel Sherman Potter in "M*A*S*H" died today at the age of 96. On TV, he was also part of the original "Dragnet" from 1967-1970, and standout performances on film in The Ox-Bow Incident and High Noon. A great actor, incredibly funny, and a nice and generous man from what I understand.
—-
On to more fun topics: Tomorrow night at NerdMelt, we've got The Imaginary Radio Program with Maria Bamford, Eliza Skinner, MC Mr Napkins, and more! Show's at 8pm. Feel free to check out our Channel Zero podcast with Maria.
—-
Tonight we have holiday episodes of "Modern Family" and "Happy Endings" and a good roundtable on "Chelsea Lately" to look forward to as the need to laugh is desperate. For you kinky freaks, I've included a behind the scenes clip from "American Horror Story" at the end of this post.
—-
The TV Junkie Must-Watch Plan: "Up All Night," "Modern Family," "Happy Endings," "American Horror Story," "Chelsea Lately," "Late Show With David Letterman," "The Late Late Show With Craig Ferguson"

8:00pm Up All Night NBC - First Christmas Reagan is so determined to make provide Amy with a perfect first Christmas that she turns to her mother (Blythe Danner) for help; Chris searches for a gift for Reagan; Ava is concerned when her boyfriend plans to spend Christmas with his ex-wife.

9:00pm Modern Family ABC - Express Christmas The family puts together a quick Christmas celebration when they realize they won't be together on the actual day.

9:30pm Happy Endings ABC - Grinches Be Crazy Desperate to earn money, Max agrees to play Santa at Penny's charity event; Jane tries to reclaim money she and Brad saved for their vacation after she accidentally gives it to the housekeeper.

10:00pm Psych USA - The Tao of Gus Shawn and Gus hide a witness at a remote commune for progressive intellectuals.