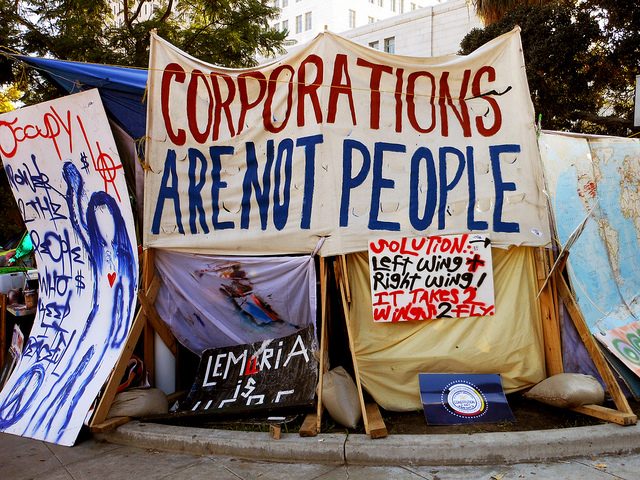 Photo by ~db~ via the LAist Featured Photos pool

Tuesday, the Los Angeles City Council voted unanimously in favor of a resolution declaring that corporations are not people, and consequently are not entitled to the same constitutional protections. The vote was taken following a discussion about money and politics in chambers during today's meeting. In the crowd were several participants of the Occupy LA movement.

One of the key tenets of the Occupy Wall Street and parallel movements nationwide is that the participants are calling for a removal of money from politics. Large corporations, in particular banks and other financial sector businesses, are among the targets of the Occupy protests.

If the resolution is supported by Mayor Antonio Villaraigosa, the city would be on record in support of federal legislation that would ensure corporations are not entitled to the same rights as people, especially when it comes to spending money to influence elections, explains City News Service. The resolution also proposed language for a constitutional amendment declaring that money is not a form of speech and affirming the right of the federal government to regulate corporations.

"Every American should have an equal voice in their government,'' said Councilman Eric Garcetti, who co-sponsored the resolution with Councilman Bill Rosendahl. "But unless there are big changes, your voice is only as loud as your bank account. And its the big corporations that have the largest bank accounts of all.''