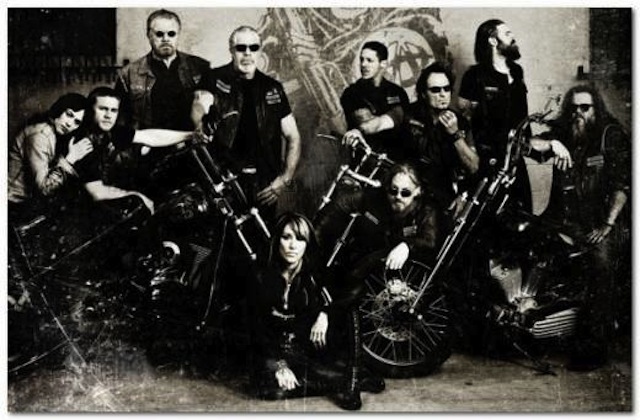 Tonight at 10pm FX airs the season finale of "Sons of Anarchy" - one of these guys has been cut out of the picture, will there be more tonight?

If good TV is of the slightest concern to you, the "Sons of Anarchy" season finale is the only place to be tonight at 10pm. As I wrote last week, this season finale is a lot different than the one we enjoyed last year. Last year was a thematic finale but this year's finale will expose an incredible amount of details and hints about what is to come next year which I think series creator Kurt Sutter has every intention of stepping into at high speed. If you don't want to be left behind, you've got to watch tonight.
—-
This week at the Paley Center for Media: Tonight the center features "The Donna Reed Show" Reunion. 45 years after airing its last episode, the Paley Center will welcome members of the iconic series cast and creative team for a look back at this TV classic, including the screening of highlights and rare footage from un-syndicated episodes not seen anywhere in decades. On Friday, December 9th, the center hosts Tropicana Nights: A Salute to the Music of I Love Lucy, to celebrate the musical legacy of "I Love Lucy." The evening will include special guests Lucie Arnaz, Desi Arnaz. Jr. and award-winning composer and arranger Ron Abel for an illuminating conversation filled with classic clips and a special musical performance.
—-
Today Shout Factory released the relatively new "Transformers Prime: Darkness Rising" which premiered just a year ago. The up to date animation and complex stories put the original series into "kids stuff" perspective. Perhaps the cheeseball movies could take a cue from this relaunched series?
—-
On Sunday, Larry King revealed that he'd like to be cryogenically preserved. Actor/writer/producer Joshua Malina quipped on Twitter (as King) "I'll die as I lived."
—-
David Wain's "Wainy Days" on MyDamnChannel.com just launched a new season on Sunday and now the show is sponsored by J. Lo's Fiat which is good because it's ensuring some longevity for the show and more of David Wain's insanity. Episodes are posted in 2 parts every Sunday (I've included Part 2 of the 1st episode below with the incredible Lizzy Caplan) and this season we'll be seeing Ken Marino, Steven Weber, Erinn Hayes, Jorma Taccone, Zandy Hartig and Thomas Lennon.
—-
The TV Junkie Must-Watch Plan: "A Night At The Movies," "New Girl," "Raising Hope," "Sons of Anarchy," "Chelsea Lately," "Conan" (second half), "Late Night With Jimmy Fallon"

8:00pm A Night at the Movies TCM - Merry Christmas! Exploring iconic holiday films including "It's a Wonderful Life," and "Miracle on 34th Street."

9:00pm New Girl Fox - Bad in Bed Jess tries to take her relationship with Paul to the next level; Schmidt attends his boss's baby shower.

9:00pm American Chopper Discovery - The Build-Off The winner of the ultimate three-way bike build-off is announced at the Hard Rock Hotel in Las Vegas.

9:00pm Mysteries at the Museum Discovery - Anthrax; Marilyn Monroe; Hunley Submarine Don examines a cardboard box the once held a country's fear, a pill bottle from Monroe's death and a Civil War submarine

9:30pm Raising Hope Fox - The Men of New Natesville Burt pushes Jimmy to be more of a daredevil; Jimmy and Frank try to take revenge on their former high-school nemesis.

10:00pm Sons of Anarchy FX - Season Finale. To Be, Part 2 Jax faces obstacles as he attempts to finalize the gun deal between the Irish and the cartel

10:00pm Chopped Food - Can't Catch Me, I'm the Gingerbread Lobster! Gingerbread houses in the appetizer round; prized meat and vegetable in the entree dish