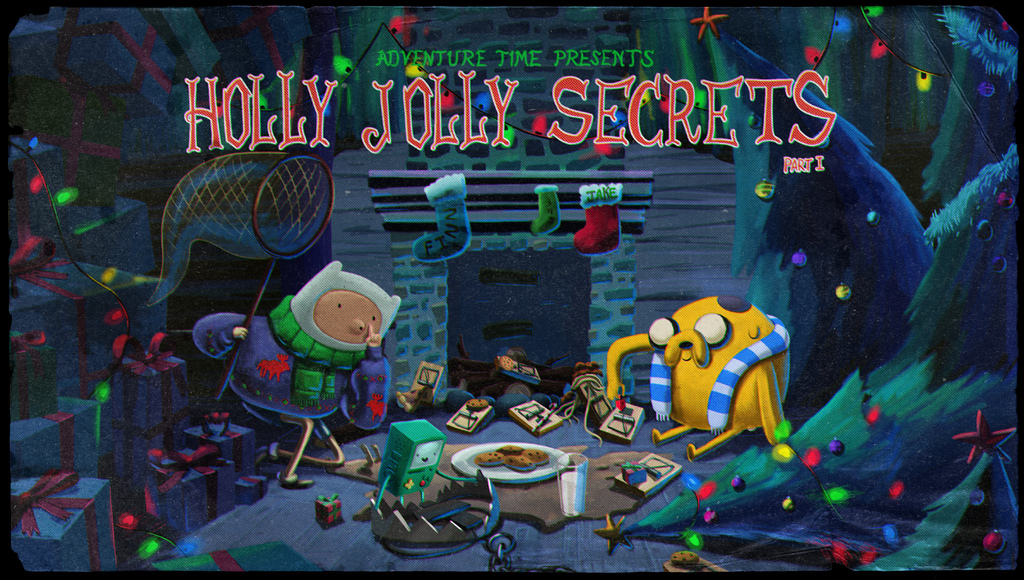 "Adventure Time" has a holiday special airing tonight at 8pm!
"Adventure Time" has a superspecial 1/2 hour holiday edition tonight that is not to be missed! Put on your Christmas sweaters, heat up some cocoa, and settle down with Finn and Jake for what I predict will be a new Christmas classic (move over Charlie Brown).
—-
Not only is there a new episode of Anthony Bourdain's "The Layover" tonight at 9pm on the Travel Channel, you can hear nearly an hour and a half conversation between Anthony Bourdain and Marc Maron on an episode of WTFpod posted just a few hours ago - a must-listen!
—-
Speaking of Marc Maron, his WTFpod reposted his interview with the incredible comedian Patrice O'Neal who tragically died last week after suffering a stroke in late October. Other tribute podcasts, so far, include comedian Robert Kelly's You Know What Dude, comedian Joe Matarese's Fixing Joe #48, with many more sure to come. Close friend of Patrice O'Neal, Bill Burr, is honoring his passing by not issuing an episode of the Monday Morning Podcast this morning.

You can pre-order Patrice O'Neal's soon-to-be-released album, Mr. P, with all proceeds benefitting his family. Great comedy by a great comedian who should have been with us for another 40 years.
—-
Get your tickets now for Paul Scheer's 3rd Annual Sexy Christmas Spectacular at the Largo this Saturday. Check out these amazing folks from TV and beyond who will be part of the show: Paul Scheer (no duh!), Ed Helms ("The Office"), Casey Wilson ("Happy Endings"/"SNL"), Rob Huebel ("Childrens Hospital"/"Human Giant"), Melissa Rauch ("Big Bang Theory"), June Diane Raphael ("NTSF:SD:SUV::"), Brandon Johnson ("NTSF:SD:SUV::"), and many more!
—-
Fans of ABC's "Modern Family" might like to check out the collection of Threadless t-shirts that Alex and Luke Dunphy have been sporting over the last couple seasons.
—-
I thought this was an Onion News Network spoof, but this actually happened: Pamela Anderson played the Virgin Mary in a Canadian TV Christmas Special.
—-
Jimmy Fallon will be coming out with a new album next summer - it'll be song-parody based but not too many details are available. Maybe Fallon will discuss it on with Brian Williams tonight as he is a guest on "Rock Center" (NBC @ 10pm). Fallon's guests tonight include Steve Marti and musical guests Snoop Dogg and Wiz Khalifa, who may or may not be involved with the new record? Time will tell.
—-
The TV Junkie Must-Watch Plan: "Adventure Time," "The Layover," "Rock Center With Brian Williams," "Chelsea Lately," "Late Show With David Letterman," "Late Night With Jimmy Fallon"

8:00pm A Charlie Brown Christmas ABC - The classic - and in a half hour format which means it won't be overly hammered by commercials.

8:15pm David Copperfield TCM - (1935) Dickens' Victorian orphan (Freddie Bartholomew) drifts until he finds a friendly aunt and the girl he will marry.

9:00pm You Deserve It ABC - A woman tries to win money for her former Naval Corpsman brother, who lost a leg in Iraq and is now studying to become a prosthetics doctor.

9:00pm The Layover Travel - Rome Tony explores the Eternal City from the Tiber River to the ancient alleyways in 30 hours.

9:00pm American Chopper Discovery - The Build-Off Senior, Junior, and Jesse James compete in a build-off with the winner earning the bragging rights as the best bike builder in the world.

9:55pm Hawaii Five-0 CBS - Pahele McGarrett and the team search for a missing bus full of school children and those responsible for the crime.

10:00pm Castle ABC - Cuffed Beckett and Castle wake up handcuffed together in bed in a locked room with no memory of how they got there.