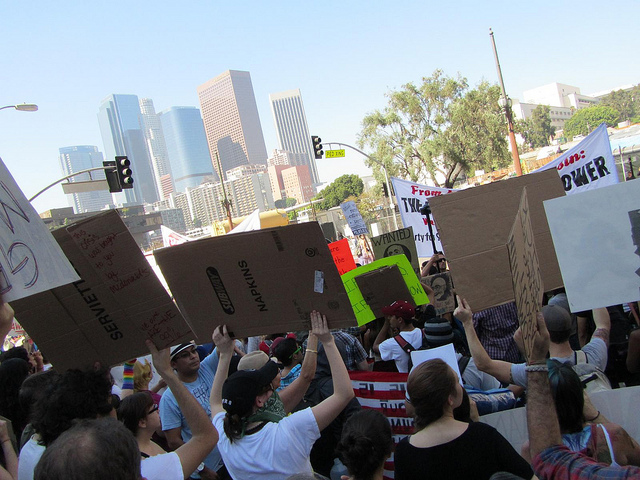 Photo by Jennifer Gaillard via the LAist Featured Photos pool

In the weeks before the Los Angeles Police Department cracked down on Occupy L.A., nearly a dozen undercover detectives infiltrated the movement to learn about protesters' plans to resist eviction.

An anonymous source spoke about the plan with City News Service (and the Los Angeles Times confirmed this).

What were these undercover agents able to figure out? The anonymous source told City News Service that some intelligence suggested that protesters were preparing bamboo spears and other potentially dangerous weapons when the raid started. That didn't end up happening. The officers who began going undercover about two weeks ago also gathered specific information on demonstrators who they thought posed a threat.

Occupy L.A. protester Mario Brito said the operation "smacks of politically motivated policing." He added: "What was the crime here other than violating a curfew ordinance? You don't need undercovers to police that."

The raid's point man LAPD Cmdr. Andrew Smith wouldn't give any comment on the use of undercover detectives, saying that it was against department policy to discuss undercover operations. But he said it is important for the department to understand the protesters before the raid. He says that even intelligence isn't enough to help predict how something like the pre-dawn raid would go: "There's always a question mark. It could be that suddenly there's counter-demonstrators causing problems in an otherwise peaceful crowd."