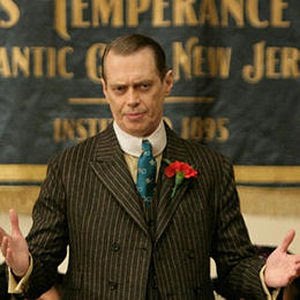 This weekend we get Steve Buscemi hosting "SNL" _and_ on "Boardwalk Empire"!
This weekend's (non-sports) TV revolves around the double-dose of Steve Buscemi that we'll get via his hosting "Saturday Night Live" (with music guests The Black Keys) and his regular gig as Nucky Thompson on HBO's "Boardwalk Empire" on Sundays. Don't forget to wrap up your Sunday viewing with "After Lately" on E! at 11pm - a show, based on its hilarious writing and performances from the "Chelsea Lately" gang, should really take off this season (sneak peek vid clip at the end of this post!).
—-
ABC is saying that "Pan Am" is not cancelled despite not having a second season booked yet or revealing if/when this season's remaining episodes will air. I guess the proper term for this kind of treatment is "placing the series in limbo," how about "Purgatory"? Maybe the series is in a coma? Whatever the term is, the prognosis isn't good.
—-
A couple weeks ago I wrote about the possibility of Roger Ebert's "At The Movies" getting pulled off of PBS and unfortunately the show has been put on hiatus. Ebert was looking for another funding source as he has been footing the bill for the majority of the show since its inception. I'll admit that I'm naive to the intricacies of how PBS shows get funded but one would think that PBS corporate would step in to figure this one out. With all the licensed crap from the UK, one would think that the network would like to see more excellent shows like "At The Movies" but whatever it takes to make that happen hasn't happened.
—-
The Hollywood Reporter has a great little interview with Yvette Nichole Brown aka Shirley from NBC's "Community" - last night's episode was also great with a past connection between Shirley and Jeff Winger exposed. Will the TV gods please smile upon this show and assure us that it will return?
—-
The TV Junkie Must-Watch Plan: Tonight - "Nikita," "Onion News Network," "Late Night With Jimmy Fallon." Saturday - "Saturday Night Live." Sunday - "Boardwalk Empire," "Hell On Wheels," "After Lately," "Dexter" (on late rerun), "Homeland" (on late rerun)

8:00pm Nikita The CW - Guardians Nikita asks Owen to help her steal another black box; Amanda is furious when she realizes Alex received information from Percy

9:00pm Boardwalk Empire HBO - Under God's Power She Flourishes Nucky prepares Margaret for a worst-case scenario; Jimmy revisits his college days; Mickey Doyle must share his liquor profits; Nelson's past comes back to haunt him.

10:00pm Hell on Wheels AMC - Bread and Circuses Durant's answer to the railroad's financial problems spurs a brawl between Cullen and Elam.