LA Times Posts Names of Those Arrested at Occupy LA, Stories Begin to Unfold About What Happened During the Raid 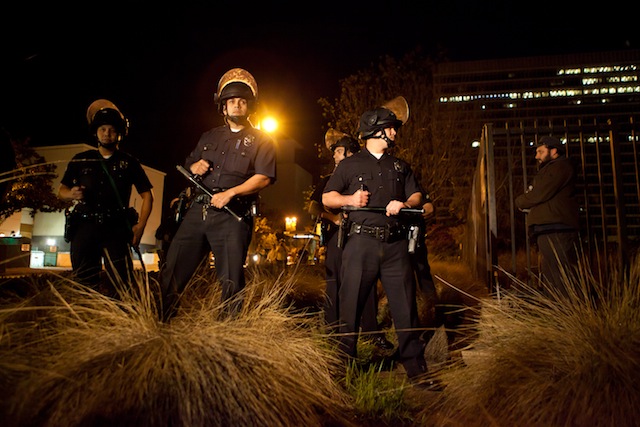 The LA Times has obtained a list of the people who were arrested during the raid of Occupy LA. The names, ages, races, hometowns and occupations of arrestees are published on the paper's website as a searchable database.

Altogether there were 292 people arrested. The Times reports that their median age is 26, that men outnumber women by three to one, and that the majority were white. Among the names were singer/poet Michelle Shocked.

For all arrested, bail was set at a minimum of $5,000, and most were charged with failure to disperse.

Needless to say, neither the arrests nor the publication of the list (nor, in fact, the list itself) are being taken sitting down. In the comments section on the Times, at least four people stated that the list got their occupation wrong. One commenter asked that her name be taken off the list, and another said that she was at the raid and was arrested but her name isn't on the list.

On Twitter, those arrested are sharing their stories with the hashtag #OLA292. Many are still in jail, having not been able to post the steep bail — which lawyers have said is excessive, given that the charge of failure to disperse is a misdemeanor — and still others say that they were arrested while trying to leave the park:

@dani_e_hill: @OccupyLA i was arrested trying to leave the "unlawful assembly". held on police bus for 7 hours. was held for 24 hours total #OLA292 #ows

@mary_menville: Some of the #ola292 were practicing civil disobedience, but a lot of people were trying to COMPLY with police orders when arrested.

Still more arrestees are sharing stories about what they went through getting to jail, in jail and then trying to get out. Some say they were held on a bus for hours, others say it took nearly a full day to get out of jail even if they were able to post bail:

One woman's story can be heard in detail at UStream. Her name is Deirdre, and she was at Occupy LA working the food tent. Here's part of her story of the night of the arrest, during which time, she says, she wasn't allowed to use the bathroom or to get her inhaler when an asthma attack started. For the rest, click here and scroll ahead to 1:56:00:

"I stayed at the food tent as long as I could. We passed out apples, we tried to keep people happy and safe. I hid the cans [from food] to help us remain nonviolent. [Another protester] and I walked up the streets after we were told by the police to leave. We walked down the streets to a car waiting for us until we were told to get on the sidewalk or be arrested. We went to the sidewalk and found riot police on either side of us, coming closer. It made me nervous, but the police officer in front of us said, "Wait just a moment and we'll let you go."

To my surprise, within moments I watched [my friend] get tied and taken away. I then saw a legal observer — the kind with the pass, not the green hat — taken away as well. And then it happened to me. The people who had hopped over the fence, who had disobeyed the order to go to the sidewalk, were left alone. The people who had listened to the police, remaining calmly and peacefully on the sidewalk, found themselves tied and taken away, or left standing on the street for a couple hours...

I was one of the last put on the buses, standing and shivering outside, [then] taken on the bus with several other women. There were men behind me as well. We spent almost eight hours being driven back and forth. There was a point in time [when] the sheriffs who were driving decide to pull over and have some food. As they sat with their feet propped on the dash, we begged to be allowed to go to the bathroom. Our hands were still behind our backs. It had been hours. Some of really had to go to the bathroom. We decided amongst ourselves we would say who this happened to, but one of us really had to go to the bathroom. So together, we surrounded her so the men behind me and the drivers in front of us couldn't see her, and we with our hands behind our backs helped take her pants down so she could go to the bathroom on the seats, cause that was the only option.

We had asked for water, we had asked for humanity. Although it sounds a little dramatic, humanity is what we needed. When we asked for that they turned Christmas music on so loud that we couldn't hear each other, so that they couldn't hear us asking for humanity. At one point they had the air conditioning turned up so high that it triggered asthma for me and another girl. I knew my inhaler was in the duffel bag and I tried to say, "I understand if you can't get it but I do need my inhaler." Another girl spoke for me because my voice wasn't working. The sheriffs both made fun of her, and then told me, "this isn't the movies, you know."

Not all of the officers treated us this way. The bus drivers were awful. I heard other buses experienced similar things. When we went to the Metro station, the officers were embarrassed. They offered apples, they offered burritos."