@AlbertBrooks tweeted this morning: "The winds were so strong in Hollywood last night they actually blew away some of the bullshit" which is a joke, of course, because he's talking about Hollywood and that's impossible.
—-
You watched AMC's "The Walking Dead" midseason finale on Sunday with its climactic scene - see the above video for details on how the crew put it all together.
—-
We didn't watch the Grammys last night because it's probably the most cynically business-oriented awards show of the year and we all know how exploitive the music industry has been over the past half century, so why contribute your eyeballs? That being said, it would be awesome if Seth MacFarlane beat out Barbra Streisand, Susan Boyle, Harry Connick Jr. and Tony Bennett for a Grammy.
—-
Any comments/feedback about "American Horror Story" last night? Joshua Malina's guest spot was spot on in our book, can't wait to see the guy as a cast regular on "Scandal" which starts up in early 2012. How about "The Soup" in its new Wednesday night spot? My problem with "The Soup" moving is that it was a show you could count on every Friday night and that's a precious commodity these days as Fridays continue to be a wasteland.
—-
With the exception of FX's "It's Always Sunny In Philadelphia" and "The League", and Showtime's "Dave's Old Porn" it's an NBC Universal night this Thursday (see the Must-Watch Plan below). Absorb as much "Community" as you can as I fear for the future of the show. The highlight for "The Office" is Maura Tierney's guest spot as Mrs. California to James Spader's Robert California - should be good stuff (see pic below). The weakest link tonight, unfortunately, is "Whitney" but "Chelsea Lately" fans (myself included) will be eager to see how Chelsea Handler does in her guest spot on the show - I saw a sneak peak last night and the scene looks very good. For guests, Jimmy Fallon has Steve Buscemi, who will be hosting "Saturday Night Live" this week, and former "SNL" castmate Darrell Hammond.
—-
There Might Be A God: The "Sons of Anarchy" soundtrack is beating out "Glee" in the Amazon's Best Sellers list.
—-
There is an amazing show at the Improv Lab tonight, its Eddie Pepitone's album release party and Bloodbath with guests: Sean Conroy, Dana Gould, Pete Holmes, Todd Glass, David Feldman, Ron Lynch, Jimmy Dore, David Zasloff, Paul Gilmartin and maybe even more. You'll be lucky to get tickets but if you can't then you can (and should) check out Eddie's album, A Great Stillness.
—-
The TV Junkie Must-Watch Plan: "Community," "Parks and Recreation," "The Office," "Whitney," "It's Always Sunny In Philadelphia," "The League," "Chelsea Lately," "Dave's Old Porn," "Late Night With Jimmy Fallon"

8:00pm Community NBC - Foosball and Nocturnal Vigilantism Jeff and Shirley bond over foosball; after breaking Abed's limited edition "Dark Knight" DVD, Annie claims that someone broke into the apartment and stole it.

8:00pm The Ex-Mrs. Bradford TCM - (1936) Clues point back to a doctor (William Powell) as he sleuths out murders with his mystery-writer ex-wife (Jean Arthur).

8:30pm Parks and Recreation NBC - The Trial of Leslie Knope Things come to a head for Leslie, Ben and Chris.

9:00pm The Office NBC - Mrs. California Robert California brings his wife (Maura Tierney) into the office to find her a job; Dwight opens a gym in the building.

9:30pm Whitney NBC - Up All Night When Lily asks Whitney to be her maid of honor and plan her engagement party, the stress drives Whitney to see a therapist; Roxanne decides to take control of her future.

10:00pm It's Always Sunny in Philadelphia FX - Thunder Gun Express The gang tries to see the hottest action movie of the summer; the President visits Philadelphia.

10:00pm Weed Wars Discovery - World's Largest Medical Marijuana Dispensary The DeAngelo brothers are hit with a $1.2 million tax bill, which could shut down their cannabis dispensary.

10:30pm The League FX - The Out of Towner The guys are psyched for a visit from one of the league's out-of-towners; Kevin and Jenny get in over their heads with a local drug dealer; Taco goes on a radical diet. 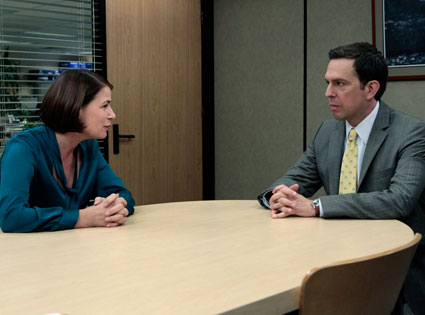