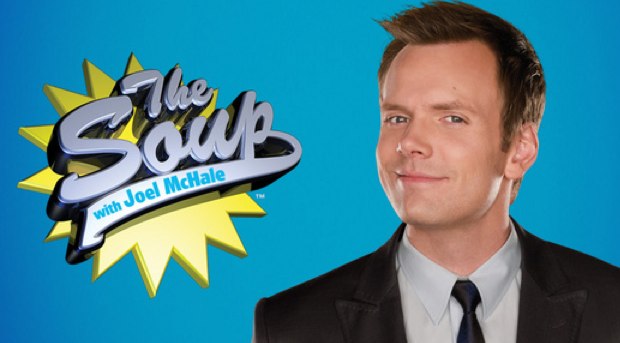 E! has moved Joel McHale and "The Soup" from Fridays to Wednesdays at 10pm starting tonight!

Last night Occupy LA was shut down as part of a coordinated national government effort that included Philadelphia and several other cities. LAist, KCET, and the LA Times provided some great coverage online and TV outlets like KTLA, KCAL, and ABC 7 provided TV imagery if you chose to follow along that way as well. [There was a report that another LA-based CBS affiliate chose to run a rerun of "The Late Show With David Letterman" instead of the CBS feed of the event - can anyone confirm this?] It was easy to get a more complete picture of what was actually happening by running UStream feeds (I had four going) from protestors and citizen journalists on the ground both inside the park under siege and from its immediate vicinity.

It was easy to debunk the hype from TV reporters as well as the posturing by police by going to the view of a handheld camera or cell phone in a part of the park that they were referring to. When one LAPD officer said "Things are going to get dangerous very soon" at a particular corner because of protestors who "needed to calm down" you could see from a UStream view that protesters in that area were seated peacefully. On the whole, both protestors and the LAPD acted with composure with protestors not giving cause for violence and police implying that they could respond with violence at will.

Legal wrangling will enter a frenzy as courts will determine if LAPD violated laws protecting peaceful assembly as well as restricting the movement of the press and citizen reporters. Los Angeles Mayor Villaraigosa, whom it is reported to have never spoken to protestors in the 60+ day event, will also be called to task on his complicity with the Department of Homeland Security and other Federal government agencies whom also may have broken laws protecting free speech and freedom of assembly. This was an expensive night that will continue to rack up bills for quite some time to come, with a balance that will show that it would have been less expensive for the city to have allowed the peaceful protest to continue.

An additional opinion I have is that if you are a journalist or media outlet based in LA and you weren't on site or following along to get the word out of this event to the world you are a failure and embarrassment and should go wait some tables. What're you waiting for, an earthquake?
—-
Tonight on TV: E!'s "The Soup" with Joel McHale, one of our favorite shows of all time, moves from Friday nights to Wednesday nights at 10pm, celebratory guests include Jimmy Kimmel, Kurt Sutter and Katey Sagal of "Sons of Anarchy," and Danny Pudi of "Community." —- The psychic pornography known as "American Horror Story" (FX at 10pm) somehow takes it up a notch tonight with special guest star Joshua Malina and references to LA's infamous Black Dahlia murder case.
—-
The TV Junkie Must-Watch Plan: Dial M for Murder, "MythBusters," "American Horror Story," "Chelsea Lately," "The Colbert Report," "The Late Late Show With Craig Ferguson"

9:00pm MythBusters Discovery - Toilet Bomb Adam and Jamie take on a bathroom bomb; testing out if a flying V works for planes as well as it does for birds.

10:00pm The Soup E! - Joel McHale and Co. move to their new time slot with Jimmy Kimmel, Kurt Sutter and Katey Sagal of "Sons of Anarchy," and Danny Pudi of "Community" are guests.