LAPD is on a citywide tactical alert, and it appears as though the Occupy L.A. raid will happen tonight.

Live coverage of the raid via Ustream says the raid is slow moving and strategic. Venice 311 tweeted information from an LAPD scanner, which informed that 900 officers are currently en route to evict the remaining occupiers and that the LAPD has setup a processing and booking station at Dodger Stadium. A live chopper is circling City Hall.

We'll be watching the #occupyla hashtag and liveblogging as the raid progresses. If you have any updates, photos or video, you can contact us on Twitter or at tips@laist.com.

3:42 AM LAPD Cmdr. Andy Smith spoke to media on scene after Beck and Villaraigosa made brief remarks. Smith said there were only 2 minor uses of force during the operation. When asked if officers were taking DNA swabs as rumored, he clarified that the white jumpsuits are HAZMAT suits worn by officers going into the camp because there was concern of staph infection, human waste, and other health concerns. Currently there is at least one protester still in a tree, and also a few people left inside the park who will be arrested. Everyone arrested, said Smith, "wanted to be," and that they were all given ample time to leave the scene tonight before being arrested. They will be arrested with "409 failure to disperse at the scene of an unlawful assembly." The course of action is to complete the arrests and barricade the park, store the property left for occupiers to retrieve it, clean the trash, and then begin to rehab the park.

3:25 AM Chief of Police Charlie Beck and Mayor Antonio Villaraigosa made a brief statement starting at 3:23am. Media were asked to not heckle the men, and it was made clear to the media that Beck and Villaraigosa would not be able to answer any questions. A proud Villaraigosa noted the success of both a "professional and restrained police force" and Charlie Beck. Beck said that over 200 arrests were made with minimal use of force. Commander Smith estimated that 1,400 officers executed the raid. A formal press conference with arrest and police totals is expected for later this morning. 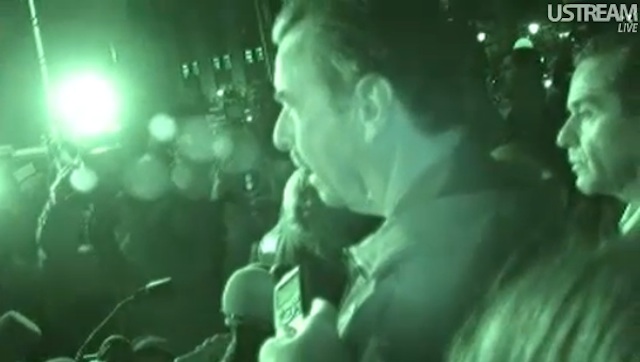 3:14 AM Just now on OccupyFreedomLA Ustream, a witness says she is looking at about 20 undercover police officers fist bumping with uniformed officers. They apparently looked just like all the occupiers clad in 99% t-shirts.

2:59 AM L.A. Now posted that the camp is in shambles. "Tents had been pulled up by police, leaving behind a scene of litter, cardboard boxes, plastic tarps and clothes." Street artist Saber tweeted @OccupyLA: "LAPD LARGEST GANG IN THE UNITED STATES"

2:53 AM Commander Smith says there are about a dozen protesters left inside and Mayor Villaraigosa may make a statement.

2:47 AM Police have lowered Mark Lipman from his perch and arrested him. @DavidBegnaud: "The mayor has just arrived..walking into the encampment. He's here just in time to watch #LAPD shake that guy out of a tree." 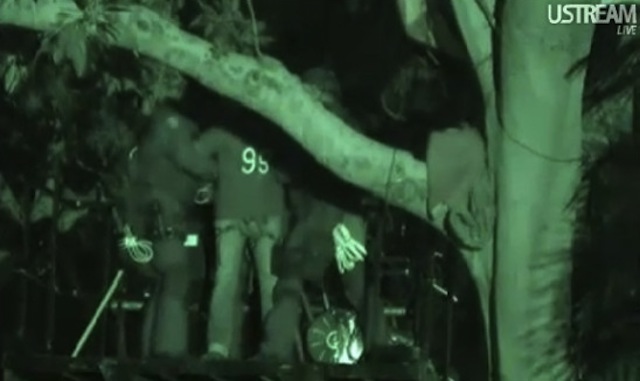 2:42 AM @OccupyProtest: "Orders given to take down people streaming"

2:38 AM Via LAPD scanner, two people claiming to be press were arrested when they couldn't produce credentials or identification, said they left said documents in their cars. Police did not buy their story, arrested them and plan to sort it out later.

2:33 AM LAPD just said via the scanner that they should "probably try to box them in" regarding one of the lingering street crowds. Police plan to use vehicles to try to contain them. Protesters are running. Police are to make arrests then collapse back eastbound. Occupy L.A. tweeted at 2:28am, "LAPD Cherry Picker prepares to 'pick' tree top Occupier from his 72 hour perch. ~pj" 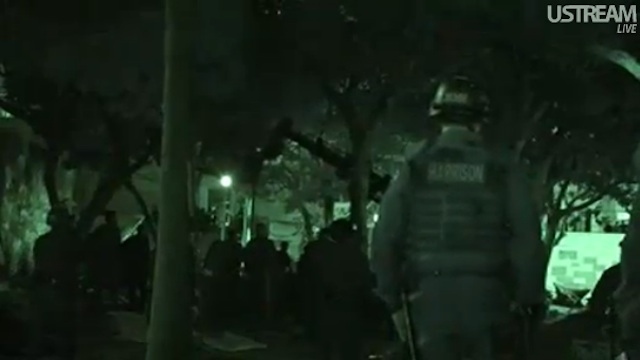 2:25 AM @OccupyCanton: "Cherry picker #LAPD tactical vehicle being brought in for tree fort protestors #OccupyLA" Uh oh, Mark Lipman... Occupy LA posted on their Facebook wall around 2:15am, "Hundreds of cop still in Solidarity Park, now arresting and carrying out the less than 100 peaceful protestors from the inner circle ~SR"

2:04 AM Impending mass arrests at 1st and Main.

1:53 AM Per a live interview on KTLA with reporter David Begnaud and an Occupy L.A. participant, one or two protesters are inside the "box" artwork inside City Hall Park, cut holes in it and have been recording the entire raid. They may still be in there.

1:47 AM Mayor Antonio Villaraigosa issued the following statement at 1:01am. 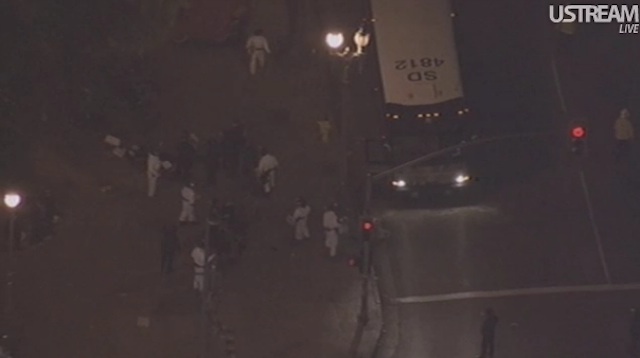 At approximately 12:30am, the LAPD began enforcing the closure of City Hall Park after giving those in the park a final opportunity to leave without facing arrest.

We have taken a measured approach to enforcing the park closure because we have wanted to give people every opportunity to leave peacefully. I ask that anyone who remains in the park to please leave voluntarily.

Our approach also recognized the human need in the encampment. Since the park closure was announced on Friday, outreach workers with the Los Angeles Homeless Services Authority have walked through the park, assessing needs and connecting interested individuals in need with an alternative place to spend the night.

During the park closure, a First Amendment area will remain open on the Spring Street City Hall steps.

Once the park is cleared, it will be repaired and returned to all Angelenos to exercise their First Amendment rights.

1:44 AM Police continue to make arrests but are shifting focus to deal with the large crowds that must disperse.

1:31 AM Protesters at Spring and 1st have been given 5 minutes to disperse or face arrest.

1:28 AM A few people are still standing ground in City Hall Park. LAPD says they are working to get them out peacefully. So far no injuries to protesters or officers have been reported. The raid has been peaceful. No estimate available yet for how many arrests have been made.

1:26 AM Los Angeles Police Protective League President Paul M. Weber today issued the following statement this morning as the LAPD was in the process of enforcing the law and closing down the Occupy L.A. encampment at City Hall.

Amid ever-changing political winds, Los Angeles Police Officers have adhered to the highest standards of law enforcement in dealing with the Occupy L.A. protestors over the past two months. Acting on the commands of the civilian leadership in Los Angeles, the LAPD cleared the Occupy L.A. camp. While there is a place for civil protest, the unsanitary and dangerous conditions of the Occupy L.A. encampment required that the encampment be disbanded. The LAPD officers' training and experience have served them well in dealing with a wide range of individuals with different agendas. We commend the officers for effectively and efficiently ending Occupy L.A. at City Hall with minimum use of force.

1:19 AM LAist Assoc. Editor Emma Gallegos just reported that a barricade may have been opened near 1st on the east side. A bunch of protestors are flooding in. Lots of cheers. KTLA says LAPD are in HAZMAT gear (white jumpsuits) because they wanted to be prepared in case protesters flung feces or urine at them.

1:15 AM Three officers in white jumpsuits have to tackle one Occupy LA protester resisting arrest. Officers pinned the occupier to the street to cuff him. Chief Charlie Beck was just seen entering the encampment area. 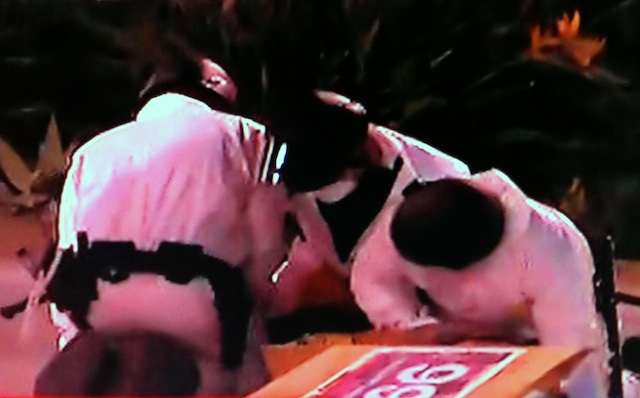 1:05 AM Buses that will hold arrestees are getting into position outside City Hall Park.

1:02 AM Good Jobs L.A. just emailed, "La Placita Olvera Church (located at 536 N. Main St) has opened its doors to give sanctuary to evicted Occupy LA activists so they can continue their efforts on behalf of the 99% who continue to struggle with the devastating loss of jobs and homes." A crowd of about 200 is moving eastbound on 2nd towards Broadway. LAPD is working to control all breakout groups.

12:45 AM Sidewalks in front of City Hall are being cleared now. Arrests likely to begin in mass soon as the 10 minute deadline is about to be up. LAist Assoc. Editor Emma Gallegos witnessed some protesters start to "get into it" with cops, and then "nonviolent monitors" stepped in to calm down those protesters.

12:42 AM It's estimated that there are maybe hundreds of people left in the park. A few tents remain, but LAPD are making quick work of dismantling any structures set up in the park.

12:36 AM LAPD declares unlawful assembly at City Hall Park. "You have 7 minutes to decide if you want to leave or be arrested" was announced first by an officer on a megaphone, then a truck equipped with a bullhorn made the official announcement.

12:29 AM Police just told OccupyFreedomLA Ustream, "Things are going to get dangerous very soon." Some people are exiting the park.

12:26 AM LAist Assoc. Editor Emma Gallegos, on scene, reports that there are lots of people in the camp, and police are trying to clear it out. A large group of protestors are gathering on the east side of City Hall. Die-hards are inside chanting, "The whole world is watching!" 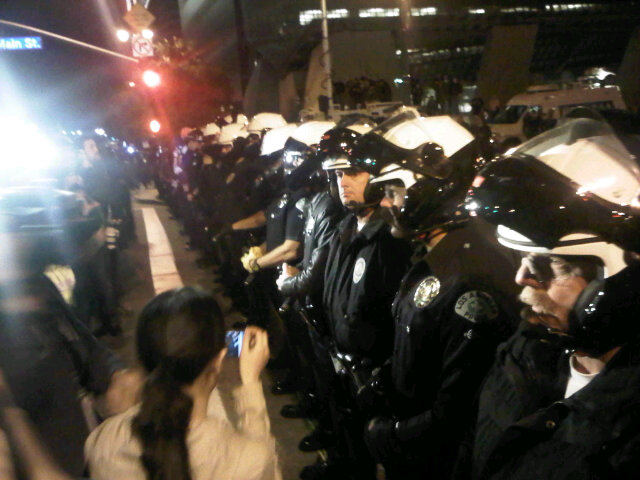 12:21 AM LAPD is kicking down tents out into the street. Hundreds of officers are in Solidarity Park. Crowd chants, "We are the 99%!"

12:18 AM Arrests happening. NO ANNOUNCEMENT was made. Lipman is still in his tree. 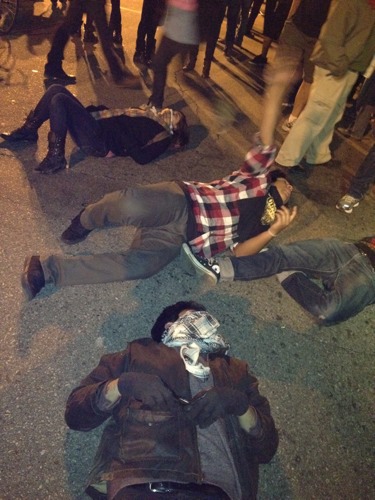 Photo via Twitpic
12:15 AM Police are moving in fast and aggressively. Occupiers are chanting, "We are peaceful!"

12:11 AM LAist Assoc. Editor Emma Gallegos, on scene, says she has spotted orange buckets set out that are believed to be to hold used tear gas canisters.

12:06 AM Buses have left Dodger Stadium and are en route.

11:52 PM Aliso and Main may be where protesters will attempt to gather. Per LAPD scanner, a cyclist was letting protesters know to head there. Just heard on LAPD scanner: "We're going in quiet."

11:35 PM @LAWeeklyNews: Reporters in the LAPD's select media pool aren't allowed to Tweet during the #OccupyLA raid. Dare we say we're kind of happy we're NOT in the pool?

11:25 PM @jennymedina: "From Reuters pool report: Roughly 1200 police officers - 30 buses full- were at Dodger stadium ahead of move to #occupyla"

11:22 PM Offramps into downtown from 101 Freeway are closed. A peace sign at Spring and Temple has been spray painted. @dennisjromero "#occupyla protesters lay down at 1st and Main"

11:04 PM Police clad in riot gear are standing at Broadway and 1st. Protesters are chanting, "We pose no threat!" and "We apologize!" 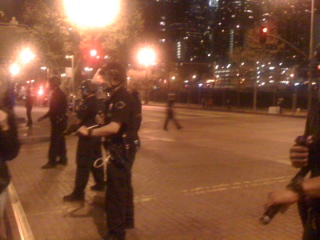 10:54 PM @oakFoSho Unnamed Source telling on ground MSM reporter that when helicopter LIGHT goes off, that is the sign to move in!

10:46 PM Occupier Mark Lipman is still perched in his tree. 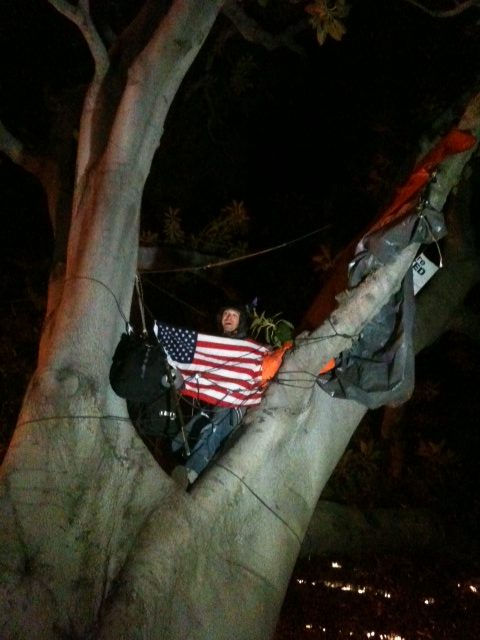 10:39 PM LAPD will declare an unlawful assembly first, according to David Begnaud of KTLA. LAPD has begun to form a perimeter and is setting up skirmish lines.

10:34 PM The crowd is estimated at 1,000 people. People are already chained arm in arm in the center of Solidarity Park.

10:26 PM Multiple sources are suggesting that Occupy Oakland Live on Ustream has the best live footage.

10:13 PM LAPD is handing out flyers saying the park closes at 10:30pm and they will enforce that closure. Fireworks are currently being set off near the encampment. Occupiers are chanting, "All day, all day, we will occupy L.A.!" 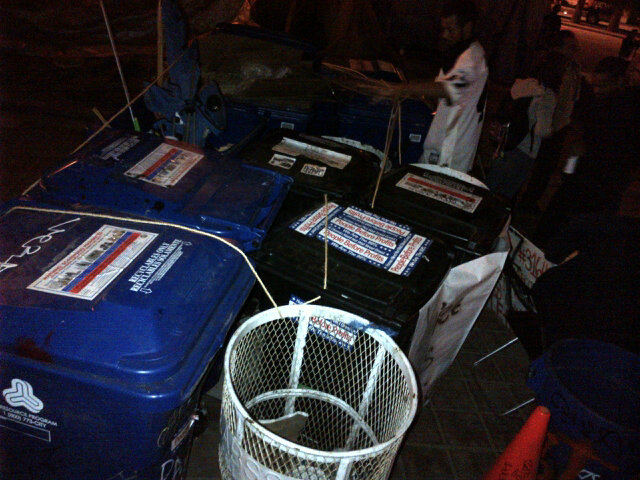